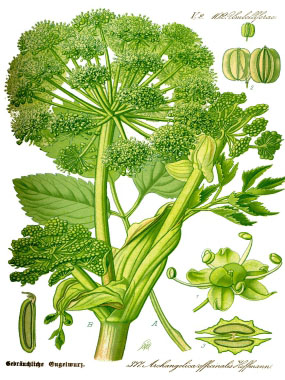 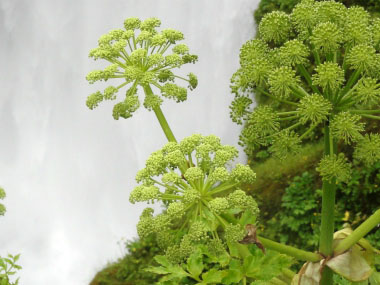 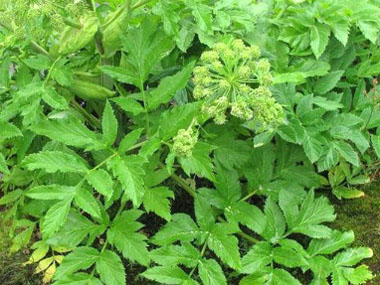 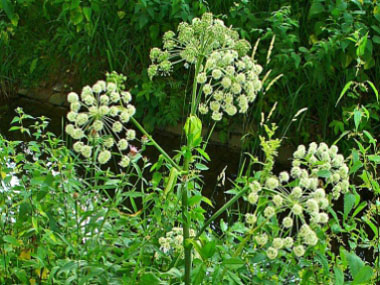 Angelica atropurpurea is a biennial, edible wild plant in the Apiaceae family. The roots are long, spindle-shaped, thick and fleshy. For centuries this plant, and its close cousin garden angelica, have been believed to treat almost every ailment. Apparently, it has been known to help treat several different types of stomach issues. This plant grows in the same areas as the poisonous water hemlock – be sure to have angelica identified by a someone who knows their plants before harvesting! Like all species of angelica, wild angelica contains phototoxic compounds called furanocoumarins that may cause skin sensitivity to the sun.

Large umbrella-like clusters of white flowers emerge atop of a thick stem. The large hollow stems are pale purple to dark purple. The appearance of the leaves might be confused with the leaves of poisonous hemlock water dropwort (Oenanthe crocata).

The flower structure is inflorescence with a compound umbel, and secondary umbels (20 to 40). The flowers are very small, white-greenish and measure 4 to 5 mm wide. They have five petals, five stamens and a pistil of two fused carpels, and two styles. Flowers anytime from early June to early August depending on location.

Fields of Nutrition has medicinal benefits and vitamin/mineral content of Angelica.

Leaves grow alternate with large petioles, are stalked, and have a large sheath. The blade is triangular, and 2 to 3 times pinnate. Leaflets are fleshy, with toothed margins that are lobed; the terminal leaflet has three lobes. Leaves are bright green and divided into many leaflets which are finely toothed or serrated. They clasp the base of the plant with somewhat purplish bases.

Angelica grows quite tall, up to 2.5 metres (6 to 7'). The stem is glossy, glabrous, with the lower part purplish, and the upper part can be reddish. The stem is hollow, and is fluted.

Although angelica can grow in many areas but tends to prefer along streams, and in moist soils in woodlands, and wetlands. Native to Eastern Canada and Eastern United States.

The leaves and stalks are edible. Use stems in salads, or raw; leaves in soups, stews, and teas. They have a liquorice-like flavour, and can be used as a flavouring in mixed salads. Stalks (younger) and young shoots can be consumed cooked or raw (but should be peeled). They can be used like celery once boiled. A tea can be made from the leaves, seed or roots. Angelica pairs well with fennel.