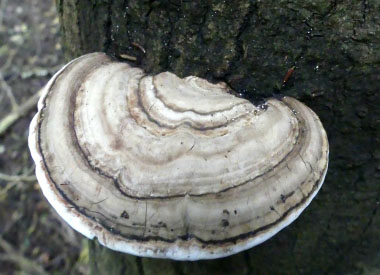 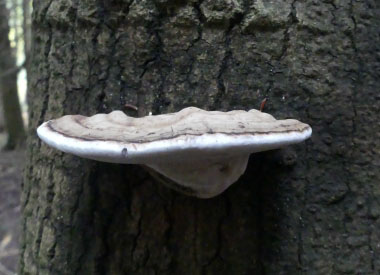 Most people have seen Ganoderma applanatum at one time or another; it is widely distributed and has been used by many artists to create some incredible drawings. It is saprobic and sometimes parasitic; growing alone or in groups on decaying logs and stumps, or from the wounds of injured, living trees. Specimens can develop for decades.

The cap surface of this conk looks “unvarnished”, is furrowed, lumpy, and it has a brown-crusted cap surface making it very easy to spot. The margin is white or whitish. The white pore surface bruises brown upon touching making it very tricky to get if using it for artwork. The flesh is brown to cinnamon brown (rarely whitish) and it is very tough. The cap can measure anywhere from 5 to 75 cm wide.

It has no height as this is a bracket fungi. Some specimens may have a lateral and stubby stipe but this is not common.

Ganoderma applanatum is found on most species of hardwoods and on some conifers in wooded areas. It is found singly or in small groups. This bracket fungi grows throughout Canada and the U.S. It grows in many countries throughout Europe and Asia and in Australia. It is reported to grow in other countries in the southern hemisphere as well.

Artist's conk is perennial, with new growth each year leading to new furrows on the surface. Therefore, there is no specific season.

This is not considered edible as it is because it is far too tough. This must be chopped into small pieces and used as a tea. Or, alternatively, once chopped it can be dried, then ground into a fine powder that can be added into smoothies or various dishes. It can also be used in tincturing as this is highly medicinal. They are very pleasant smelling. They are used as a flavour enhancer in Asian cuisine.