Charaka Samhita is one of the most ancient, comprehensive and authoritative works of ayurveda. It is considered the original reference book of holistic ayurvedic medicine. In Sanskrit, the term "charaka" could also mean a wandering religious student, scholar, or ascetic. 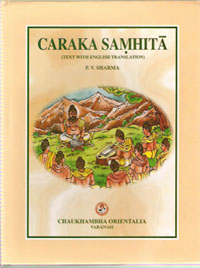 "The three—body, mind and soul—are like a tripod, the world stand by their combination; in them everything abides. It is the subject matter of ayurveda for which the teachings of ayurveda have been revealed." ~ Sutrasthana of Charaka Samhita, ayurvedic text. (1.46-47)

"Life (ayu) is the combination (samyoga) of body, senses, mind and reincarnating soul. Ayurveda is the most sacred science of life, beneficial to humans both in this world and the world beyond." ~ Sutrasthana of Charaka Samhita, ayurvedic text. (1.42-43)

Ayurveda is one of the oldest continuously practiced health-care system in the world. It is an ancient Indian healing system. It uses a range of treatments including yoga, massage, acupuncture and herbal medicine to encourage health and well-being. In short, it offers a comprehensive outlook to a healthy life. Derived from its ancient Sanskrit roots - "ayus" (life) and "veda" (knowledge), its origin goes back thousands of years. It signifies the science of life, the origins of most forms of natural and alternative medicine.

Ayurveda in India is mentioned in Rig Veda, one of the oldest (about 6,000 years) philosophical texts in the world. The verses in Rig Veda refer to the five basic elements of the entire creation, with the primary forces of air, fire, water, and earth as comprising the basic principles of Ayurveda as a therapeutic science. The Rig Veda also mentions organ transplants and herbal remedies.

There are three great treatises of Ayurveda, namely: Charaka Samhita, Sushruta Samhita, Vagbhata. Charaka Samhita and Susrutha Samhita are considered its two most important treatises. Compiled during the golden age of Ayurveda and long before the Christian era began, Charaka Samhita concentrates on internal medicine (kayachikitsa), and Susrutha Samhita, on surgery. The third of this great treatise, Vagbhata, emphasizes on treating body physiology and therapeutic use of metals and minerals. While Charaka deals with Self, Vagbhata mentions the body as the home of Self.

Aside from the three great treatises, there are three lesser treatises of Ayurveda: Sharngadhara Samhita, Bhava Prakasha, and Madhava Nidanam. Sharngadhara Samhita enumerates and describes numerous pharmacological formulations and contains the first textual elaboration of diagnosis by means of the pulse; Bhava Prakasha, the most recent of the classical texts, gives the characteristics of many foods, plants, and minerals; and Madhava Nidanam deals with the classification of diseases in Ayurveda. It covers a wide range of diseases including children and women's disorders, although it does not give explanations or suggestions for treatment (chikitsa).

Today, the subject of nutrition is far more complex, and the perception with food as mere calories has changed. In recent years, the holistic wisdom of Ayurveda has gained popularity as an alternative and complement to modern medicine.

The Caraka Saṃhitā ("Compendium of Caraka") is an early Ayurvedic encyclopedia on medicine. Charaka is often transliterated from Sanskrit as Caraka. The "c" was changed to "ch" to aid in the correct pronunciation in these cases. Of the three surviving ancient great treatises of Ayurveda, namely, the Charaka, Sushruta, and Vagbhata, Charaka is believed to be the oldest and the most important ancient authoritative writings on Ayurveda. Along with the Suśruta Saṃhitā ("Compendium of Suśruta"), it is an important source of medical and life understanding and medicine practice in antiquity.

Charaka Samhita explains the logic and philosophy on which this system of medicine is based. According to Charaka, science is dependent upon a quality of the intellect that enables it to perceive phenomena brought into existence by a multiplicity of causes. Much of this treatise is in the form of a symposium wherein groups of Ayurvedic scholars take up a series of topics for discussion. This gives indication that the science of Ayurveda is a product of constant verification, fine-tuning and authentication by an active community of physicians.

It concentrates on the branch or section called kayachikitsa (internal medicine). This is largely the theory of the internal fire or the digestive function of the body - or internal medicine, in modern terms. From a greater perspective, this work represents a certain value of consciousness as it gives notion that life is fundamentally a field of intelligence and pure knowledge. Charaka lays emphasis on health and longevity, to strike a balance between one's corporeal and spiritual being, a reason why it goes detail into the diagnosis of a disease's origin.

Its language was written in Sanskrit in poetic format, with meter and melody. Poetry was known to serve as a memory aid. The valuable information in this work is scattered over thousands of sutras or verse statements in the manuscript. In ancient times this style helped aspiring students to memorize the sutras. Charaka Samhita's extant text has aṣṭāṅga sthāna (eight sections), totaling 120 chapters containing 8,400 metrical verses, which are often committed to memory by modern medical students of Ayurveda. Seventeen (17) chapters of Cikitsā sthāna and complete Kalpa sthāna and Siddhi sthāna were added later by Dṛiḍhabala (5th century).

The Charaka Samhita starts with Sūtra sthāna which deals with fundamentals and basic principles of Ayurveda medicine practice. Unique scientific contributions credited to the Charaka Saṃhitā include a rational approach to the causation and cure of disease, and introduction of clinical examination's objective methods. The eight chapters are:

The detailed biography of the author of this treatise, that is, sage Charaka, is not certain, or, if this represents the work of a "school of thought." Interestingly, it is not an original writing of a single person, rather, like all Vedic knowledge it is a continuation and renewal of that ancient knowledge system. Therefore, it could have come from a group of scholars or followers of a man known as Charaka if not an original composition from a single person named Charaka. In fact, Charaka had redacted the work of Agnivesa Samhita (46,000 version), which is no longer extant. The available form of Charaka Samhita was again worked upon by Dridhabala (living in about 400 AD) long after sage Charaka.

For practical purposes, Charaka’s compendium represents Atreya’s system of medicine as handed down by his student Agnivesha. Passages on the qualitative and quantitative aspects of food in Charaka Samhita are contained in the earlier portions composed by Charaka.

The popularity and continuity of Ayurveda tradition lies in its approach to heal a person in its totality - the healing the body, mind and spirit - all in one go. Its unique understanding of the similarities of natural law and the working of the human body, as well as its holistic treatment methods, help it to strike a balance between the two.

Charaka followed the Atreya School of Physicians, which predominantly deals with treatments through internal and external application of medicine. Its focus is on healing the body, mind and soul of a patient in a minimally invasive manner, hence, the placed emphasis on the diagnostic part of the treatment, as well as on the timing and manner of the collection of medicinal plants.

Like the other treatises of Ayurveda, Charaka Samhita has different translations. The P.V. Sharma translation comes in four volumes, two of original text and two of commentary about the original work. Sharma's English version is said to be a scholarly and relatively faithful work, with numerous appendices and an extensive index. The B. Dash / R.K. Sharma version lacks these features but does have extensive commentary incorporated in with the original text.