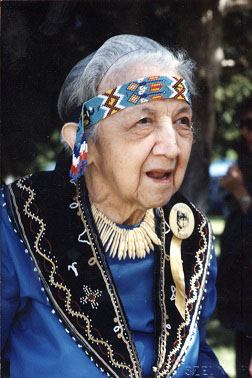 "Take the best of what the white man has to offer and use it to still be Indian."

"Many objects carry a living spirit."

Gladys had many impressive accomplishments throughout her life. Here are a few as they appear on the Mohegan Tribe website:

Born on June 15, 1899 to John and Harriet Fielding Tantaquidgeon (both Mohegan), Gladys Iola Tantaquidgeon was the third of seven children.

By the age of five, the tribal nanus, Emma Baker, (a well-respected Medicine Woman) had chosen her to be educated in the traditions that comprise Mohegan culture. Throughout her childhood, Gladys learned traditional practices, beliefs, and lore from nanus (also called nonners) and other grandmothers.

My first trip out to the field, where medicine plants were growing, that would have been with grandmother Baker, grandma [Lydia] Fielding, and grandmother [Mercy Ann Nonesuch] Mathews. They were gathering them for winter use and at that time I would have been about five years of age … I think that it kindled a spark. Later on, I became interested in our Mohegan herbal remedies…here in my recollection, the women were the ones who gathered the plants and prepared the medicines.

From a fourth traditionalist grandmother, Fidelia Fielding, Gladys also learned the sacred ways of the Makiawisug as a child. According to Melissa Tantaquidgeon Zobel, Fidelia Fielding instilled cautious attitudes into Gladys; however, any negative notions were countered by Emma Baker’s optimism and worldliness.

Although she never graduated from formal early schooling, Gladys did briefly attend grammar school before entering the University of Pennsylvania in 1919. It was here that she studied with anthropologist Frank Speck and wrote in the field of anthropology. After completing her research at the University of Pennsylvania, Gladys (re)visited the northeastern tribes to conduct further field work.

In 1934, under the Wheeler-Howard Act, the federal government hired Gladys to administer new Indian educational privileges for Northeast tribes.

Most people believe that the greatest contribution Gladys gave to the Mohegans (and the world) was in 1931. She and her father John, and brother Harold, founded the Tantaquidgeon Indian Museum. This museum was created to display artifacts and to preserve the teaching of Mohegan culture. The museum’s motto is: “It’s hard to hate someone that you know a lot about.” Gladys worked there until 1935. At that time, Commissioner of Indian Affairs John Collier, offered her a position as a social worker on the Yangton Sioux reservation in South Dakota.

After three years as a social worker, Gladys transferred to the Federal Indian Arts and Crafts board to serve as a Native arts’ specialist under René d’Harnoncourt. In 1947 she retired from her government service and returned to Mohegan Hill to become full-time curator of the Tantaquidgeon Indian Museum.

As the years passed, Gladys expanded her Mohegan pharmacopeia by researching herbal medicine among related east coast tribes, including the Delaware, Nanticoke, Cayuga and Wampanoag. Her most-recognized work, “A Study of Delaware Indian Medicine Practice and Folk Beliefs”, was first published in 1942. This book was reprinted under the title “Folk Medicine of the Delaware and Related Algonkian Indians” in 1972 and in 1995.

Gladys continued throughout the decades to be an active member of the community. In 1992 she was elected as the Tribal Medicine Woman of the Mohegan.

The Mohegans were officially recognised by the US Bureau of Indian affairs in 1994. A major factor of this acceptance was because of Gladys. She spent decades collecting tribal records and documents, many of which she kept under her bed. The Mohegan tribe today has a population of about 2,100.

1904: Gladys started studying with her aunt in traditional herbal medicine.

1919: Gladys began studying anthropology with Dr. Frank G. Speck at the University of Pennsylvania. After completing her research there, she again visited among the northeastern tribes to conduct further field work.

1931: She founded the Tantaquidgeon Indian Museum in Uncasville, along with her father and brother, (the tribe's former chief). (She worked there until 1998.)

1934: Gladys was recruited by the Commissioner of Indian Affairs, John Collier, to serve as a community worker on the Yankton Sioux reservation in South Dakota.

1938-1947: She worked to promote Indian art as a specialist for the newly-formed Federal Indian Arts and Crafts Board in the Dakotas, Montana and Wyoming.

1940: Gladys was the librarian at the state women's prison in Niantic, Connecticut.

1942: A Study of Delaware Indian Medicine Practice and Folk Beliefs was published.

1960's: She provided free community education about Indian lifeways into the 1990's.

1972: Gladys revised her herb book and republished it as: “Folk Medicine of the Delaware and Related Algonkian Indians.”

1980's: Gladys served as Vice Chair of the Tribal Council.

1987: Gladys received honorary doctorate from the University of Connecticut.

1992: She was elected as the Tribal Medicine Woman of the Mohegan.

1994: She was inducted into the Connecticut Women's Hall of Fame.

1994: Gladys, (in part), due to her extraordinary personal records of correspondence regarding Mohegan births, graduations, marriages and deaths was instrumental in the Mohegan case for federal recognition.

1994: She received an honorary doctorate from Yale.

1996: For "consistent endeavor in the area of social justice", she received the National Organization for Women’s Harriet Tubman Award.

Gladys Tantaquidgeon, the Mohegan Indian Tribe's venerable medicine woman, died in Uncasville, Connecticut on Tuesday, November 1, 2005. Gladys peacefully passed at the age of 106 in the home she lived in all her life. The celebration of her life took place on Sunday, November 6 at Shantok, on the Mohegan Reservation in Uncasville. It was attended by thousands of family, friends, dignitaries, and admirers.

Image above courtesy of the Mohegan Tribe.