Throughout his life Hippocrates traveled widely throughout Greece and Asia Minor teaching or practicing medicine. He presumably taught at the medical school at Cos quite frequently. Undoubtedly, Hippocrates was an historical figure, and a great physician who exercised a permanent influence on the development of medicine and on the ideals and ethics of a physician. 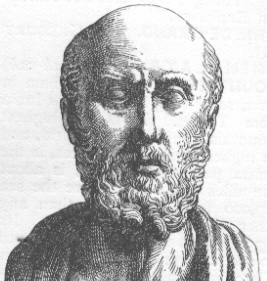 "It is necessary for a physician to know about nature, and be very eager to know, if he is going to perform any of his duties... what man is in relation to what he eats and drinks, and in relation to his habits generally, and what will be the effect of each upon each individual." - Hippocrates, On where the two worlds meet: a holistic approach to medicine.

Little is known about the early life of Hippocrates. Historians tend to agree that he was born around the year 460 BC, on the Greek island of Cos (or Kos). Soranus of Ephesus, a second-century Greek gynecologist, and considered to be Hippocrates’ first biographer, wrote about his life but the contents of this biography and later lives were either traditional or imaginative.

From the biographical accounting of Soranus: Hippocrates' father was Heraclides, a physician, and his mother was Praxitela, daughter of Tizane. He learned medicine from his father and grandfather, and studied other subjects with Democritus and Gorgias. He was probably trained at the asklepieion of Kos, and also studied from the Thracian physician Herodicus of Selymbria.

Considered to be the "Father of Medicine" and famous for "Hippocratic Oath," Hippocrates revolutionized the practice of medicine by shifting western medicine from the religious to the “rational.” He believes doctors should analyze symptoms on a case-by-case basis, instead of having blanket causes and/or cures for each disease. He developed the practice of clinical observation in four stages: diagnosis, prognosis, observation and treatment. He taught and practiced medicine. Hippocrates was so revered that his teachings were greatly taken, with no significant advancements of his methods for a long time. He and his followers were first to describe many diseases and medical conditions.

Hippocrates began the scientific study of medicine, and numerous medical writings have survived that bear his name, although most of which suspected not written by him. It is difficult to separate the facts or myths from later tales to assess his accomplishments in medicine. As time went on, reverence for the past had to contend with new developments of scientific method and discoveries. General knowledge of his medical writings might have faded, but Hippocrates continues to represent the humane and ethical aspects of the medical profession.

The Hippocratic Corpus, a collection of around seventy early medical works (containing textbooks, lectures, notes and philosophical essays on various subjects in medicine), is written in Ionic Greek that bears Hippocrates' name. The question whether Hippocrates was the author of the corpus has not been conclusively answered, but the volumes were probably produced by his students and followers due to the variety of subjects, writing styles and apparent date of construction. Notable among the treatises of the Corpus are The Hippocratic Oath (the most famous); The Book of Prognostics; On Regimen in Acute Diseases; Aphorisms; On Airs, Waters and Places; Instruments of Reduction; and On The Sacred Disease.

(Little is known about his actual timeline except his birth and death, which are also approximate dates.)

Hippocrates' actual date of death is not known. It is believed that he passed away anywhere between 83 and 90 years of age in Larissa, Thessaly. Some say he lived to be well over 100.