Jacob M. Bigelow (1787-1879) - "It is common error to infer that things which are consecutive in order of time have necessarily the relation of cause and effect." - Jacob Bigelow, botanist, professor, author and physician. 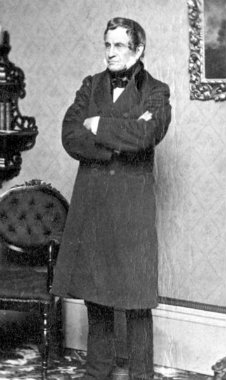 Jacob Bigelow was born in Sudbury, Massachusetts on February 27, 1786 or 1787, the son of a Harvard graduate who was a Congregational minister and a farmer. He was educated in a country grammar school until he was thirteen years old, then studied privately under Reverend Samuel Kendall in Weston. He attended Harvard from 1802 until 1806, graduating with Phi Beta Kappa. After obtaining his A.B. from Harvard in 1806, he attended medical lectures under Dr. John Gorham while teaching at the Boston Latin School.

Sometime after 1808 Bigelow left Harvard to study medicine at the University of Pennsylvania Medical School in Philadelphia, earning his M.D. in 1810. During this time he also studied under the tutelage of botanical patron and professor of material medica Benjamin Smith Barton. Bigelow developed a passion for botany and his botanical knowledge greatly increased. He practiced medicine by himself for a year without much financial success and then began a practice in Boston with Dr. James Jackson in 1811, at the same time, pursuing botanical interests. This practice was successful.

In 1815, aged 28, he became professor of materia medica at Harvard Medical School. The following year, he was also appointed Rumford Professor of the Application of Science to the Useful Arts at Harvard College.

Jacob Bigelow was an early 19th century botanist, professor, author and physician. Seeking to procure better medicines for his patients, he became the leading expert on New England botany. His three-volume American Medical Botany, published 1817-20, was the most advanced text at the time, detailing dozens of plants and their medicinal uses. It represents a milestone in the history of North American plant literature. It was also a landmark in printing technology being the first American book with printed color illustrations, most of which were drawn by Bigelow himself. He popularized the word technology in its modern sense. He was a prominent participant in the preparation of the first national pharmacopeia of America, The Pharmacopoeia of the United States of America.

His research and teaching greatly helped define the proper use of medicine, and warned of the dangers of narcotics. He wrote that some therapies then commonly used by the medical profession, including bloodletting and purging, not only had no effect on the natural course of diseases but could actually be detrimental, and argued for such practices to end. Concerned about diseases potentially spread through the common practice of human burials under and near churches, in 1831, he played a major role in the establishment and design, and founded the Mount Auburn Cemetery on a sprawling, scenic site four miles outside of Boston.

Bigelow's keen interest in mechanics paved way to his appointment as Rumford Professor at Harvard College, for the purpose of teaching the application of science to useful arts. Along with interest in non-biological sciences, he published his book of collected lectures, Elements of Technology. The term “useful arts” are what we now call technology. Although the word "technology" has its origins in the seventeenth century, Bigelow is credited with lifting the term out of obscurity and being the first to popularize its use both in his lectures and in Elements of Technology.

Dr. Bigelow was also a poet. His Eolopoesis, American Rejected Addresses was published anonymously in 1855.

Jacob Bigelow died in Boston on January 10, 1879, prior his ninety-second birthday. He was laid to rest in Mt. Auburn Cemetery, a cemetery he established. His wife was also buried there.

Bigelow is remembered in the genus Bigelowia in the family Compositae, named by De Candolle.