"The barks of trees are best gathered in the spring, if it be of great trees, as oaks or the like, because they come easiest off, and so you may dry them if you please, but indeed your best way is to gather all barks only for present use." 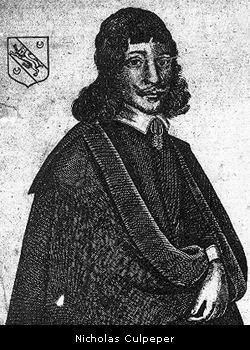 "The Herbs ought to be distilled when they are in their greatest vigour, and so ought the flowers also."

"In all Diseases, strengthen the part of the Body afflicted."

Nicholas Culpepper or Culpeper (1616-1654), was the son of a clergyman, the Reverend Nicholas Culpeper, Sr. His father died 13 days before his birth. His childhood was spent in Isfield, Sussex, where he was brought up by his mother at her family home. His maternal grandfather, the Reverend William Attersole, then minister of St Margaret's Church, Isfield, and author of many theological treatises, had a powerful influence on Culpeper's early development. He taught Nicholas Latin and Greek, whilst instilling a strong puritanical influence and a healthy disrespect for the Crown. Attersole's writings show that he had a great respect for astrology and was conversant with Ptolemy's Tetrabiblos. By contrast, his maternal grandmother first exposed Nicholas to the use of medicinal plants. These influenced his lifetime interests in astrology and medicinal plants.

At the age of 10, Culpepper started reading astrological and medical texts from his grandfather's library. In particular Sir Christopher Heydon's Defence of Judicial Astrology (1603) greatly impressed him. He was fond of the illustrations in William Turner's New Herball (1568). From his early teens he was already familiar with all the local species of herbs that grew in his hometown. On one occasion he found a copy of Anatomy of Man's Body by Thomas Vicary, a barber-surgeon to Henry VIII. He secretly read it in the hayloft above a nearby barn. He was fascinated by its descriptions of the sexual organs and the mysteries of reproduction. This book influenced his own Directory for Midwives (1651), and deeply inspired his own calling to be a physician.

In 1632, aged 16, Culpeper was sent to Cambridge University. His grandfather and mother had decided that he should follow in his father's footsteps and become a Minister. He thought otherwise, increasing his study of the classics with lectures on anatomy and the materia medica of Galen and Hippocrates. Instead of taking his theology subjects seriously, he spent most his time socialising in taverns and playing sports such as tennis, bowls and swimming. He also picked up at Cambridge the newly fashionable habit of smoking.

His time at Cambridge was rapidly ended by emotional events. He planned to marry his childhood sweetheart, the heiress Judith Rivers. Their relationship was unnoticed by their families. When Nicholas was sent to Cambridge they endured a painful separation, but remained in touch by letter. They planned to get married, and knowing that her family would not give them their consent, they decided to elope. Their plan to meet near Lewes to secretly marry ended tragically when Judith's coach was struck by lightning and she was killed. It was a devastating event that somehow became a turning point in Culpeper's life.

He never graduated, for although he was a bright scholar, he eventually left school and commenced on what turned out to be a long apprenticeship with a London Apothecary. After seven years his master absconded with the money paid for the indenture, and soon, his mother died of breast cancer. His apprenticeship completed in 1640 and he started his practice as a physician in Spitalfields.

Culpepper found love again in 1640, at the age of 24. He married Alice Field, 15 years old, who had just inherited a considerable fortune. As a daughter of a wealthy merchant, the marriage allowed him to set up a pharmacy in Spitalfields, London, outside the authority of London's city at a time when medical facilities were at breaking point. Culpeper was able to provide his services for free. He was also willing to examine patients in person rather than simply examining their urine. Using a combination of experience and astrology, he devoted himself to using herbals to treat the illnesses of his patients.

Nicholas Culpepper, English botanist, herbalist, physician, and astrologer, is one of the best-known 17th century herbalists in the world, mainly for his writings, and in particular his book, Complete Herbal and English Physician, which gives an unparalleled view into the holistic principles of the Graeco-Arabic medicine. His writings also provide an integration of astrological principles. For many centuries and in his time, astrology was used as a standard for the prognosis of disease. Although the Hippocratic writings mention the physician’s need for skill in astrological prognosis, Culpepper showed a much more integrated system in which not just diseases, but plants are given astrological attributes, making the application of medicinal plants in disease a simple and logical process that any person of his time would have been able to follow.

Culpepper's published books include The English Physician (1652) and the Complete Herbal (1653), which contain valuable store of pharmaceutical and herbal knowledge, and Astrological Judgement of Diseases from the Decumbiture of the Sick (1655), which is one of the most detailed documents on the practice of medical astrology in Early Modern Europe. As a powerful testament to his scholarly writings, his widow Alice Culpepper wrote: "My husband left 79 books of his own making or translating in my hands." One of these works, The Treatise of the Aurum Potabile was published in 1656. This in many ways is the most remarkable of all his works. The treatise is essentially a very important alchemical work that explains the philosophy behind his whole life and written works, "Being a description of the Threefold World; elementary, celestial, intellectual, containing the knowledge necessary to the study of Hermetic Philosophy."

Culpepper's books sold by the thousands and are still popular today.

In later years, Culpepper's health deteriorated. It is thought that he contracted tuberculosis from the bullet wound to the shoulder during the siege of Reading. The pressure of his studies and writing, coupled with the ravaging effects of consumption proved too much. He finally died on January 10, 1654 at the age of 38, shortly after completing The English Physician. Many of his unpublished manuscripts were published after his death, and others were lost in London's Great Fire in 1666.