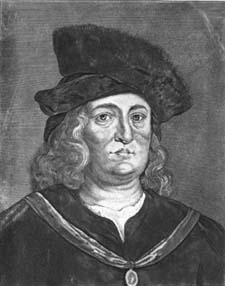 Paracelsus was born Philippus Aureolus Theophrastus Bombastus von Hohenheim (1493-1541), in the village of Einsiedeln, Switzerland. His name referred to Aurus Cornelius Celsus, the celebrated Roman encyclopaedist, one of the greatest medical writers of his time. Paracelsus' father, Wilhelm Bombast von Hohenheim, was a Swabian (German) chemist and physician, and his mother was Swiss, presumed to have died when Paracelsus was a child.

Paracelsus was a German-Swiss alchemist and Renaissance physician, whose main interest included alchemy, botany, physiology, astrology, science, and the occult. His personality was seen as stubborn and independent, an embattled reformer, and a revolutionary who insisted in using observations of nature rather than looking to ancient texts, a radical defiance of the medical practice at the time. He preferred experience and experimentation over knowledge.

A legacy of Paracelsus is his critique of the scholastic methods in medicine, science and theology. He stressed the importance of common sense and common language, and taught in German instead of Latin. His attitude towards the teachings of the old "Fathers of Medicine" was his foremost achievement for independent and empirical method to research and teaching. His insights laid the foundation for a more dynamic approach in the medical sciences, although much of his theoretical work does not withstand modern scientific thought.

He discovered many techniques which became standard laboratory practice, such as concentrating alcohol by freezing it out of its solution, prepared drugs with regard to their purity, and advocated carefully measured doses. He founded the discipline of toxicology. He is also credited for giving chemical element zinc its name, calling it zincum. Modern psychology often credits him for being the first to note that some diseases are rooted in psychological illness.

His theory of medicine is based upon four pillars, elaborated in his book Opus Paragranum (written in 1529/30): philosophy (knowledge of nature, that is, earth and water), astronomy (knowledge of the cosmos and the earth, that is, air and fire), alchemy (the whole cosmos, that is, the knowledge of all four elements) and virtue of the physician (indispensable for fulfilling the other three pillars). In his second major work: Opus Paramirum (1530/31), he gives evidence of his belief that all diseases are rooted in one of the five Entia. On the physical level, he distinguishes between Ens Astrorum or Ens Astrale (the influence of the luminaries on the body), Ens Veneni (the influence of toxics in the body) and Ens Naturale (the physical constitution itself). On the spiritual level, he differentiates between Ens Spirituale (the influence of spirits) and Ens Dei (the influence of God).

An important contribution to medicine was his discovery of new methods to treat wounds. Highly critical of the medical practices of his day, for example, Paracelsus insisted that wounds need to drain naturally. By introducing chemistry and minerals into the field of medicine, he initiated science as an integral part of medicine for the first time.

Paracelsus emphasized the curative power that was inherent in nature. He was a firm believer in the body's ability to heal itself and the relation between the mind and body. He stressed that diseases had external causes and every disease had its own characteristics, reversing the traditional view that disease was generated within the patient and followed an unpredictable course. He undertook careful studies of tuberculosis and silicosis, recognized that there was a connection between goiter and the minerals in drinking water, and was the first to recognize congenital syphilis. Paracelsus regarded mental illness as being "real" illness, and that many diseases had their roots in psychological problems. He was the first to mention the word "unconscious."

Paracelsus died on September 24, 1541, aged 47. The actual cause of his death remains unknown. After his death, a stream of his writings emerged although the exact date of their releases is not always clear. Among them were his numerous critical theological works.