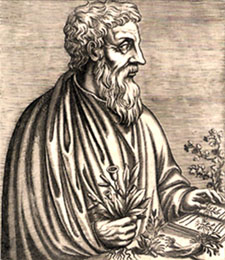 Pedanius Dioscorides was born c. 40 A.D. in Anazarbus, Cilicia, Asia Minor and died c. 90 A.D., a Greek physician, botanist, and pharmacologist. Little is known about him except that he wrote De materia medica, a five-volume encyclopedia about herbal medicine and related medicinal substances, a pharmacopeia, widely read for 16 centuries. He practiced in Rome at the time of Roman Emperor Nero, as a surgeon with the army of the emperor. This enabled him to travel extensively, seeking medicinal substances and providing him to study the features, distribution, and medicinal properties of many plants and minerals. Descriptions of nearly 600 plants, including cannabis, water hemlock, and peppermint, are contained in his five-volume De materia medica. The work deals with approximately 1,000 simple drugs.

The major accomplishment of Pedanius Disocorides is his five-volume De materia medica, the first leading pharmacological text and foremost classical source of modern botanical terminology, focused on "the preparation, properties, and testing of drugs." The systematic pharmacopoeia is all about the use of herbs, widely used by botanists and physicians during the Middle Ages. It was translated and preserved by the Arabs, and translated back into Latin by the 10th century. The five-volume work covers the following: On plant animals, On all manner of animals, On all manner of oils, On materials derived from trees, On wines and minerals and other similar substances. For 16 centuries, it became the most central pharmacological work in Europe and the Middle East. 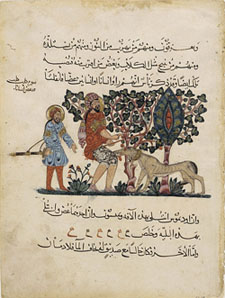 The medicinal and dietetic value of animal derivatives such as milk and honey is described in the second book, and a synopsis of such chemical drugs as mercury, arsenic (referred to as auripigmentum, the yellow arsenic sulfide), lead acetate, calcium hydrate, and copper oxide is found in the fifth book. He refers to sleeping potions prepared from opium and mandragora as surgical anaesthetics.

The original Greek manuscript of De materia medica, which was copied in at least seven other languages, describes most drugs used in medical practice until modern times, and served as the primary text of pharmacology until the end of the 15th century. Modern editions have been published in Greek (1906–14) and in English (1934). He is honoured on an Algerian stamp published in 1963 to commemorate the second Arab Medical Congress.