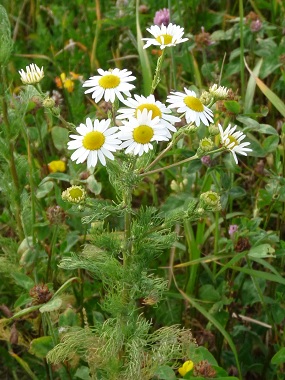 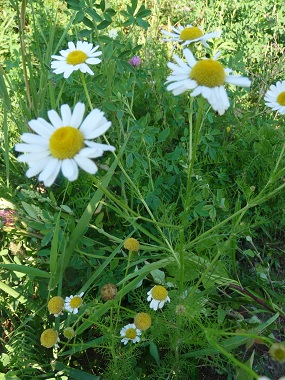 Chamomile is definitely one of the most popular wild medicinal plants that can be eaten. The two main types of chamomile are the more popular German chamomile and Roman chamomile (Chamaemelum nobile). Although they belong to different species, they are used to treat the same health ailments in herbal pharmacy. Both are used to calm frayed nerves, help in soothing various stomach problems, reduce muscle spasms, and to treat several skin conditions. German chamomile grows in many countries.

Chamomile is an annual wild edible. Easily recognized by the tiny daisy-like flowers (measuring no more than 2.5 centimetres wide), one German chamomile flower grows on a solitary stem.

Fields of Nutrition has medicinal benefits and vitamin/mineral content of Chamomile.

Chamomile, depending on conditions, can grow to anywhere from 60 centimetres to 1 metre tall.

The chamomile leaves and flowers are edible and they differ in taste. Chamomile flowers have a slight apple taste. Both can be tossed into a salad or a mug to make fresh chamomile herbal tea.