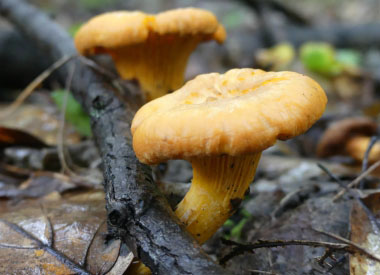 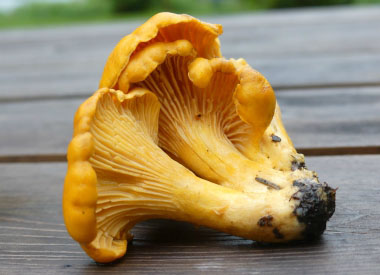 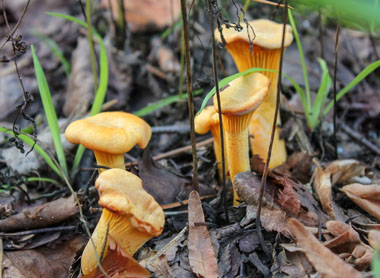 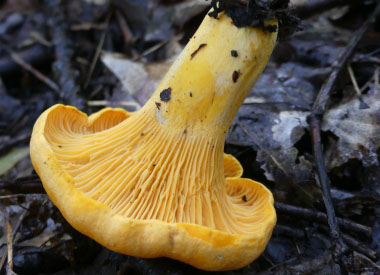 Cantharellus cibarius is widely viewed as among the most desirable of edible mushrooms. They can be found singly, scattered, in groups, or sometimes clustered on the ground in woods. Its flesh is thick, firm, and is has a scent that is somewhat apricot-like. This variety of chanterelles are one of the most popular and prolific wild mushrooms. There are well over forty chanterelle varieties across North America. While it can be difficult to distinguish between the varieties, generally, chanterelles are very easy to identify.

The chanterelle usually has a funnel-shaped cap with a diameter up to 10 cm. It has a wavy irregular margin. Colour varies from light yellow to deep egg-yolk yellow. When growing in clumps, as is often the case, the stipes are often curved and occasionally joined together near the base. The veins are very thick and decurrent, extending well down the stem; they are straight near to the stem but forked and more sinuous towards the edge of the cap.

Chanterelles are most frequently found in deciduous forest soils near oak. They often occur under beech trees as well. They are mycorrhizal, which means the fungus has a symbiotic, mutualistic association with the roots of the tree. Chanterelles grow in many countries. The can be found across Canada, the U.S., Europe, the Mediterranean, parts of eastern and southern Australia, and parts of Asia.

June to October is when you'll find these and even into November during mild autumns. Often they occur from October right through to the following March in warmer climates.

The gills are ridges that are forked and generally have blunt edges that are the same colour as the rest of the mushroom. They are often quite wavy and always decurrent.

They have a faint apricot-like scent; and a mild taste. Chanterelles are a choice edible mushroom. They can be used in risotto dishes and omelettes, and they certainly has enough flavour to make tasty soups or sauces.