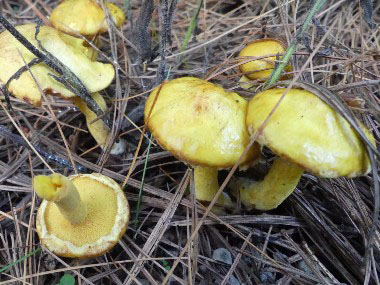 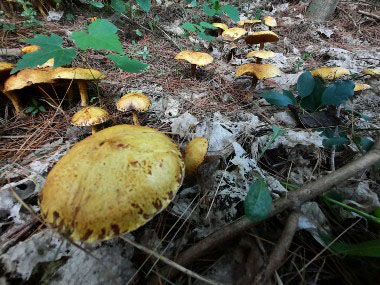 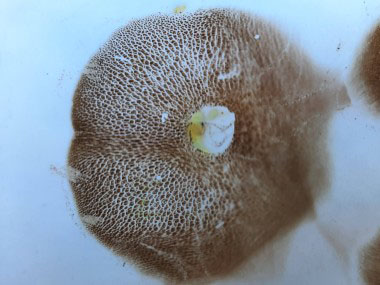 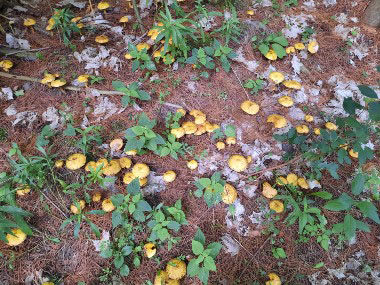 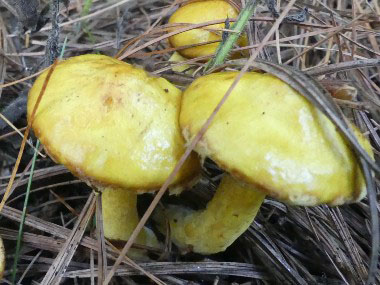 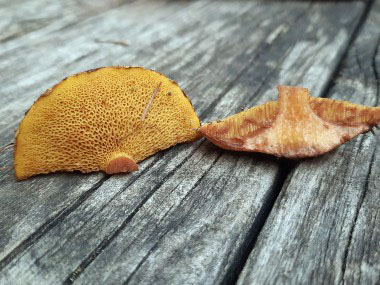 Chicken Fat Mushroom is a widespread and very common bolete mushroom. This bolete is very common in the U.S. from the northeast to the Midwest, and in adjacent Canadian provinces. This is a bolete that grows only east of the Rockies although there have been some reports claiming that it also grows west of the Rockies. These reports are inevitably the Suillus sibiricus, a similar species that grows under the western white pine. When you find these boletes it generally is due to the fact there are dozens of them growing under white pine trees.

Distinguishing features include the yellow cap with reddish brown fibers and scales, and the thin stem, which bears glandular dots and a ring or ring zone. The cap measures 3 to 10 cm (1¼ to 4″), is convex with an inrolled margin when young, but becomes broadly convex to wavy, and it feels quite slimy. The white to yellow brown veil tissue hangs from the margin.

The stipe is slender, 3 to 10 cm (1¼ to 4″) long; up to about 1 cm thick, and often crooked or bent. They tend to have reddish-brown glandular dots. On young specimens, the dots are not apparent because they the same color as the stipe. The stipe usually does not show remnants of the veil because the veil hangs from the margin and does not touch the stipe.

These boletes can be found in mixed and deciduous forests but always very close to the eastern white pine tree.

The spore print colour is cinnamon to brown.

This has pores, not gills.

Although edible, this bolete is not a sought-after mushroom. Chicken fat mushroom must be cooked or dehydrated the same day they are picked. Even after one day in the fridge, these boletes become too mushy rendering them unusable. Even cooked, the texture is not that great making dehyrating them a preferred option for using them in the kitchen. When working with them, they will turn your fingers a deep reddish/brown.