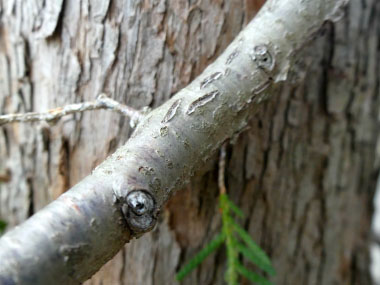 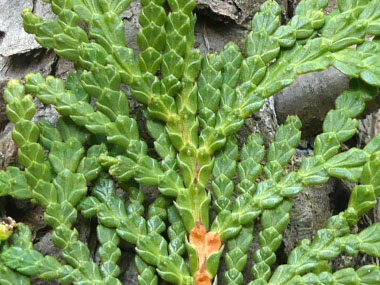 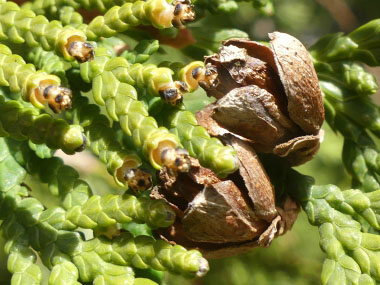 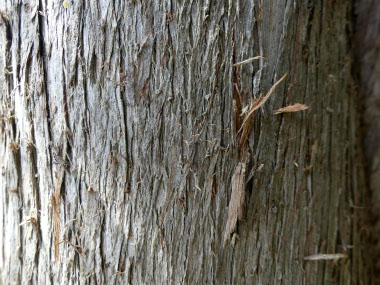 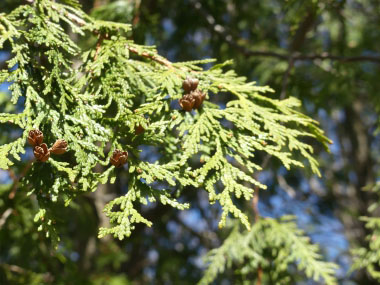 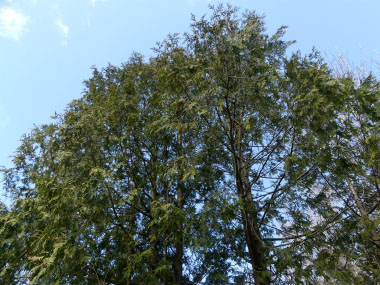 Warning: Cedar (fresh or dried) contains strong volatile oils that are toxic in large quantities. It has been been known to cause deaths. NEVER use if pregnant, breastfeeding or if there are any health issues with the urinary tract, especially the kidneys.
The eastern white cedar is also known as the eastern cedar, northern white cedar, arborvitae and swamp-cedar. In 1558, this tree appropriately received the name “arborvitae,” which in Latin means “tree of life”. Thuja occidentalis is in the Cupressaceae (cypress) family, which is native to eastern Canada and much of the north, central and upper Northeastern United States, but widely cultivated as an ornamental plant. The eastern cedar is a slow to moderate growing conifer tree that forms a narrow pyramidal shape. Extremely old trees (at least 802 years) have been reported in glacial clay soils at the Réserve écologique des Vieux-Arbres in Lake Duparquet, Québec (Archambault and Bergeron 1992). The eastern white cedar and western red cedar have a long history of medicinal uses for this tree. They were also used as a source of fibre, making fishing spears, tinder, dye, incense, and as an insecticide.

The bark of the eastern white cedar is thin and shiny when the tree is young, but separates into flat narrow strips as the tree gets older. The trunk is strongly tapered, often gnarled with thin reddy-brown bark.

The branchlets are flattened, dark green on the upper side and light-green or brownish on the base but without whitish markings.

Leaves grow opposite; are scale-like, closely overlapping, with successive pairs at right angles. The upper and lower leaves are flat,with a protruding resin gland. Lateral leaves are folded, clasping the flat leaves.

Ripe cones are pale brown, oblong, and measure 8 to 13 mm (.3 to .5”) long. Woody scales of mature female cones enclose double-winged seeds which are released the year after development.

The eastern white cedar is most often associated with cool, moist, nutrient-rich locations, particularly on organic soils near streams or other drainage-ways, or on calcareous mineral soils.It commonly grows in association with balsam fir and tamarack in the boreal region.

According to the online publication American Forests ( Winter/Spring 2017), two species of cedars have an edible and nutritious inner bark. These are the eastern white cedar and the western red cedar, (Thuja plicata). First Nations' people would harvest and dry it, then grind it into a powder for use when travelling or as an emergency. Leaves, fresh or dried, have been used for tea and other uses.