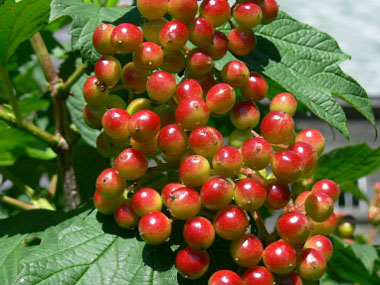 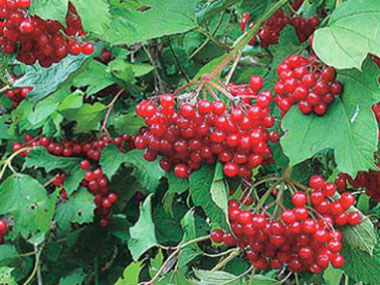 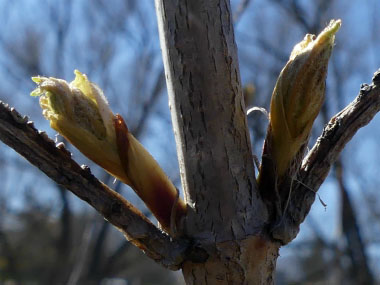 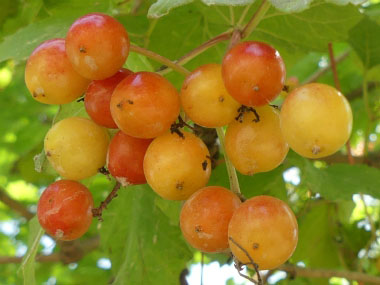 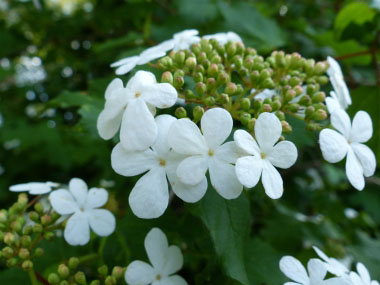 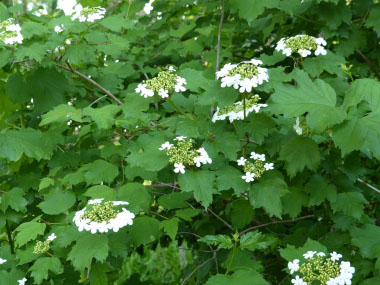 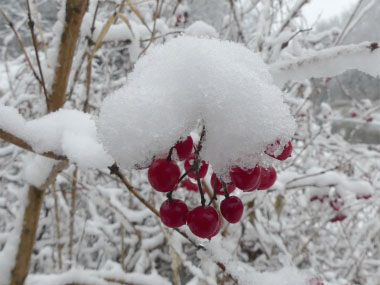 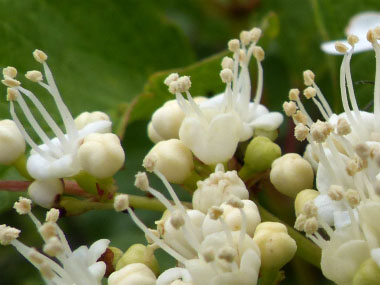 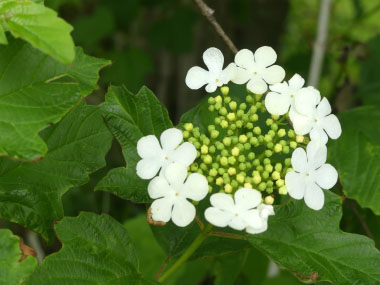 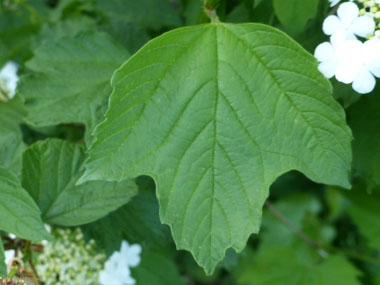 Highbush cranberry is also known as the American cranberrybush, guelder rose, and dog rowan is an easy to identify shrub, especially in the winter months. It's current Latin name, Viburnum opulus L. var. americanum Aiton was formerly known as Viburnum trilobum. The highbush cranberry is actually not a cranberry at all, though its fruit strongly (somewhat) resemble cranberries. Like cranberries, they also mature in the autumn. Native to North America, this Viburnum, a member of the Caprifoliaceae, or Honeysuckle family. The European cranberry bush and the native highbush are very hard to tell apart. The petiolar glands on the (American) highbush cranberry have convex tops and these are not flat or sunken in. They are located right where the leaf blade and petiole meet. On the European highbush, the petiolar glands are located in the same area; however, they have concave tops with flat or sunken in tops.

Twigs are a light reddish brown and have opposite buds with reddish- brown scales.

The leaves occur opposite, are simple, 3-lobed and 5 to 10 cm (2 to 4”) long. They are superficially similar to many maple leaves, but have a somewhat wrinkled surface and impressed venation. Glossy dark green in the summer, these leaves often change to yellow-red or red-purple in the autumn. The petiole is grooved and has round, raised glands near the base. The undersides are hairy. There is a pair of slender stipules where the stalk attaches to the stem, but these drop away early in the season.

The white flowers occur throughout May and June and are of two types. There is an outer ring of florets that are particularly showy. These are sterile, whereas the inner cluster of small florets are fertile. The corollas are white, and 5-parted. The outer florets have corollas with five spreading rounded lobes, a short green calyx with five pointed lobes. The inner florets are similar in shape but are slightly more than 1 cm (1/4") wide. These have the reproductive parts of five stamens that have white filaments and creamy coloured anthers and which are exerted from the corolla. These are spreading and placed alternate to the petals. The pistil and ovary lack a style. The flowers are pollinated by both wind and insects.

After the flowering period the fruit forms and gradually changes colour from green to the deep red (by August into September). This bush does not begin to produce fruit until approximately five years of age. Each drupe is almost 1 cm (1/3") across and contains one flattened 5mm wide seed. The fruit is acidic but edible off the plant and when properly prepared makes a good preserve. These persist throughout winter for wildlife. Many birds prefer to eat the berries after they have been once frozen and thawed, which reduces the acidic content.

Highbush cranberry can be found in damp thickets and moist woods, but it also can grow on drier sites. It does best on rich, moist and loamy soils in locations with mostly or full sunlight although it is quite tolerant partial shade. Established plants can tolerate drought.

Fruit of the American highbush cranberry is tart, acidic and astringent which makes it unpalatable to eat as a fresh fruit. It can be enjoyed processed as syrup, added to smoothies, sweetened in jelly or pies. Much of the astringency is in the seeds, so they should be removed before boiling the fruit, which nicely gels due to its high pectin content. Highbush cranberries are high in vitamin C. They get their red hue from the phytonutrient anthocyanin, which along with the vitamin C, offers beneficial antioxidant properties.