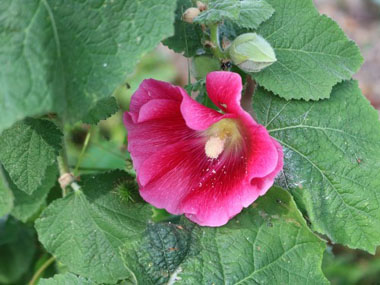 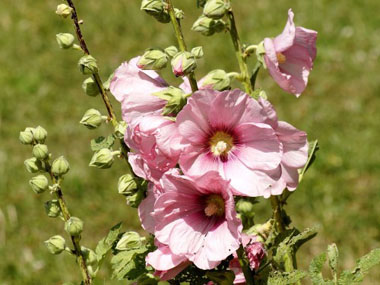 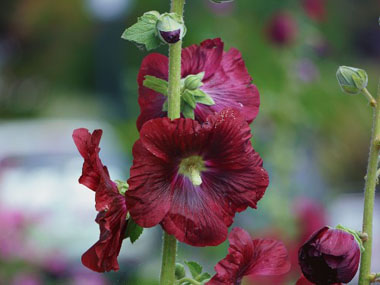 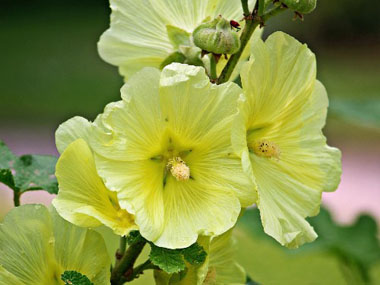 The common hollyhock traveled all over the world during the Middle Ages because of its well-deserved reputation of being able to thrive in almost any climate and soil so long as it was planted in full sun. This is still true today. The European botanical craze of the 19th century allowed botanists to create a wide variety of colours for this flower. Once planted, the hollyhock will produce many seeds and they will successfully grow year-after-year. One of the most frustrating things about hollyhocks is that they’re so tall they become gangly and often need to be staked. After your hollyhocks get going, they’ll attract butterflies, bees, and hummingbirds to your garden. Leaves, roots, flowers, and seeds can be eaten in small quantities.

Fields of Nutrition has medicinal benefits and vitamin/mineral content of Hollyhock.

All parts of the hollyhock plant have been used for natural remedies. In recent years, it has been discovered that the hollyhock bears more than a passing resemblance to its relative, common marshmallow (Althaea officinalis). In fact, these two plants share similar chemical constituents.

Hollyhock has been used as a gentle, soothing support for the gastrointestinal, respiratory, and urinary systems. It’s a popular addition to cough syrups, acting as an expectorant. Like its relative the hibiscus, hollyhock may improve circulatory health. As with marshmallow, many prefer to make their preparations of hollyhock as a cold infusion rather than expose its beneficial mucilage to high heat, which can damage it.

In Tibet, the roots and flowers are used for inflammation of the reproductive and urinary system. An infusion of either the flowers or the leaves has traditionally been used for inflammation in the mouth or throat. Topically, a poultice of leaves, flowers, or both can be just the thing for pulling out the sting of an insect bite or a stubborn splinter.

Hollyhock blossoms produce rust and red natural dye colours. Also mauves, magenta, pinks and tans depending on the colours of the blossoms and mordants used.