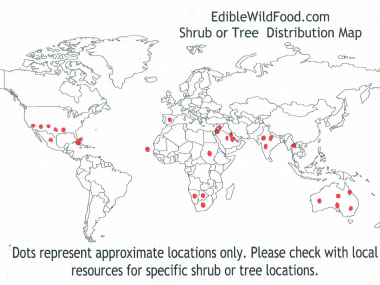 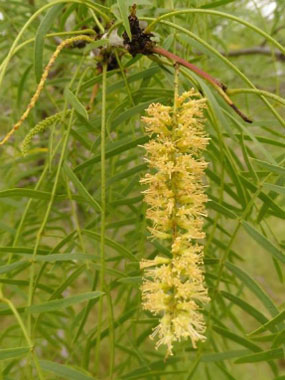 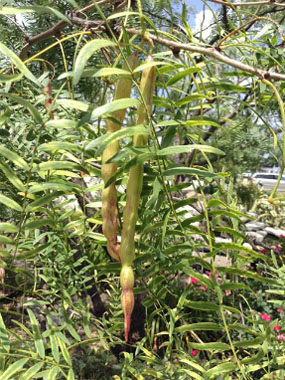 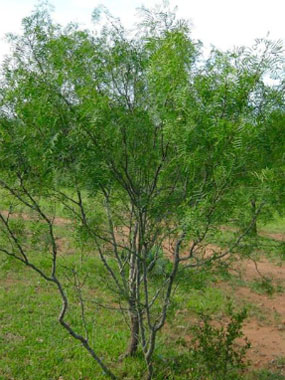 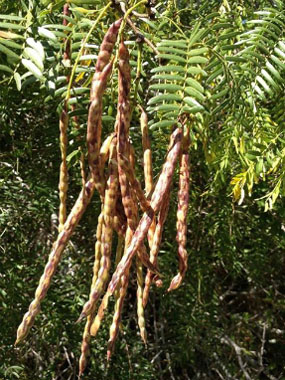 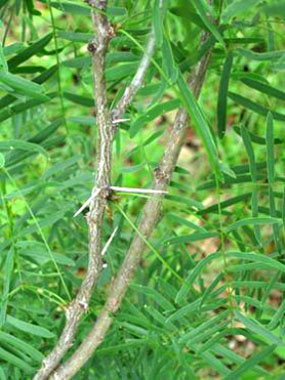 Honey mesquite is a deciduous, small tree that can reach heights of 9 metres (30'). The crown spreads a distance equal or more to the height. It is a member of the legume family of plants which includes peanuts, alfalfa, clover, and beans. Perfectly adapted for its dry environment, the mesquite is a hardy tree located more in the southern areas of the U.S. The word mesquite is a Spanish adaptation of the Aztec name mizquitl. The Apache and Isleta once applied the juice from the leaves of honey mesquite to eyelids as a treatment for irritation. The Comanche chewed the leaves and swallowed the juice for an antacid. The Navajo used the wood from honey mesquite to construct bows.

Honey mesquite has a showy trunk; thorns are present on the trunk as well as the branches. They can have a multiple trunk structure and tend to have a grayish sculptural trunk. Typically, a single-trunked tree that was cut down will soon become multi-trunked.

Twigs are armed with sharp thorns up to 10cm (2”) long especially on young plants. Branches tend to droop as the tree grows creating a canopy.

The honey mesquite tree can reach heights of up to 9 metres (30').

The leaves are alternate, bipinnate, and have petioles. There are usually one paired division (pinnae) per leaf and 6 to 15 leaflets per pinna. The leaflets are 1 to 6 cm (up to 3”) long and smooth.

Yellow flowers are in axillary spikes that are 7 to 9 cm long. The calyx has a shallow, cup-like shape. Each flower has 10 stamens and white woolly ovaries.

The legumes are straight and nearly as thick as they are broad, 7 to 20 cm (3 to 8”) long. The legumes are reddish-brown and constricted between seeds. The seeds are 6 to 6.5 mm long and brownish in colour.

Honey mesquite is native to North America, in northern Mexico and the southern USA from the Pacific coast to the Gulf of Mexico. Although very widely introduced around the world, honey mesquite is quite common in Australia and southern Africa. It occurs in parts of southern Europe, the Middle East, parts of Asia and in Cuba.

The seedpods and seeds are cooked, ground, water added, then allowed to ferment and used as a beverage. Immature seedpods are cooked and the juice squeezed out then consumed like milk as a summer beverage. Mature pods can be eaten without any processing. The seeds have been ground into a powder and used to make bread or pancakes. The roots have been used to flavour drinks. Flowers are used to make a tea. Mark at Foraging Texas warns people, up to 20 percent of mesquite pods are infected with very dangerous aflatoxin-producing fungus. Only pick pods that are still on the tree and have not been attacked by boring-beetles.

A special thank you to Mark Merriwether of ForagingTexas (https://www.foragingtexas.com/) for providing the images to help make the honey mesquite possible on our website.