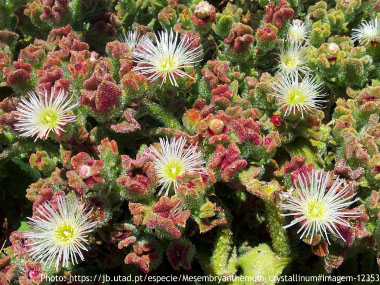 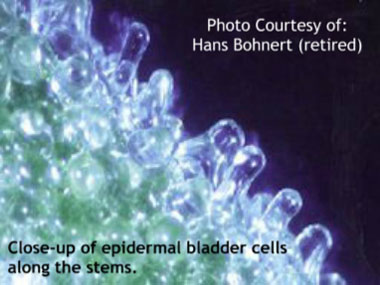 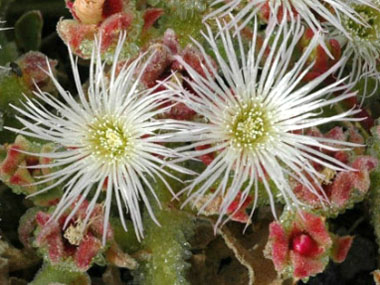 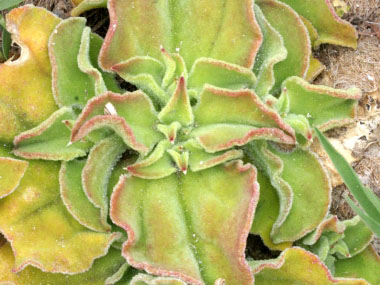 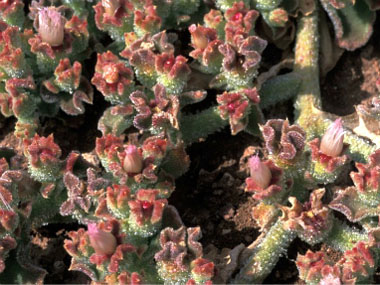 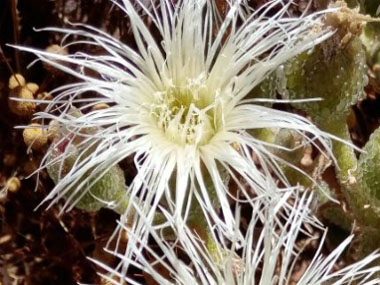 The common ice plant is a halophyte meaning it is a salt-tolerant plant that grows in soil or waters of high salinity. It is native to north Africa, south-western Africa, western Asia and southern Europe. Although it grows wild, it has been used as an ornamental plant. Due to sand used in ships ballasts, this plant made its way to a number of countries in north and south America and Australia. This hardy species in the Aizoaceae family is extremely stress-tolerant. After this plant dies, the salt leaches from the decaying plant into the surrounding soil. This increased salinity stops other, less salt-tolerant species from establishing.

This plant is a large, mat-forming annual with sprawling stems. It has peculiar leaves and stems that are covered with tiny membranes that form papillae filled with sap, which, from a distance, look like ice crystals and give the leaf a succulent texture. It is considered a robust succulent herb or dense prostrate shrub that can grow to 1 metre (3') wide.

Flowers are white with numerous petals. They have 5 sepals, many short stamens and as it ages the petals turn pinkish. Ice plant flowers are tiny and measure 30 to 50 mm across. The flower stalks are succulent. Depending on location, the crystals on the stalks range from green to red. They generally bloom from July to September.

Fields of Nutrition has medicinal benefits and vitamin/mineral content of Ice Plant.

The leaves are ovate to spathulate (broad at the apex and tapered to the base), forming a tear-drop-shape with wavy margins. As the plant ages it tends to die from the apex. Leaf arrangement is simple, opposite or alternate, and they can be found in sparse or dense clusters. Leaves at the base are 6 to 12 cm (up to about 4”) long with a stem-clasping base. The other leaves on the stems are 2 to 4 cm. On the flower stems, the leaves are arranged alternately but at the base and on non-flowering stems they are opposite. Leaves are generally at least 5 mm wide and somewhat flattened.

This plant is generally found in maritime sands and salt water marshes. It is also found in disturbed sites such as roadsides, cliffs, over-grazed areas and areas of coastal erosion. The ice plant can grow well in saline environments and nutrient poor soils. According to the USDA it is found in Oregon, California, Arizona and Pennsylvania.

Leaves and stems can be eaten raw or cooked. Although the ice plant leaves have a jelly-like interior they are known to have a slight crunch, are juicy and have a marine-like salinity. When fully ripened, the ice plant becomes sweeter. The Japanese are known to make tempura out of ice plant leaves. Leaves and stems can be pickled or used as a garnish. Leaves contain isoflavones and vitamins A, C as well as many of the B vitamins.