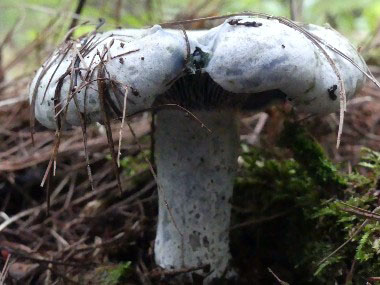 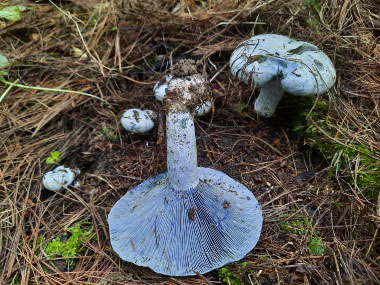 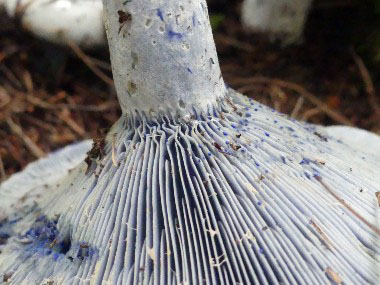 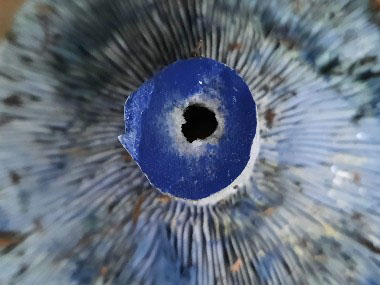 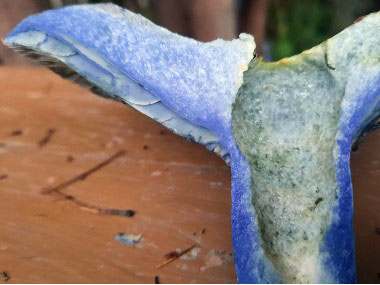 Lactarius indigo, commonly known as the indigo milk cap, the indigo (or blue) lactarius, or the blue milk mushroom, is a species of agaric fungus in the family Russulaceae. There is no mistaking this mushroom as it is a truly remarkable, blue mushroom that exudes dark blue milk when damaged with a knife. Only Lactarius chelidonium and Lactarius paradoxus come close in appearance--and they only do so when very young, before they have begun to develop their brown and yellow shades (and they also have yellowish and brown milk, respectively). This mushroom grows in well over one hundred countries and it is generally quite easy to spot. Indigo milk caps are known to reappear in the same area for many years.

This is a strikingly unique mushroom that is bluish, bleeds blue when cut; then turns somewhat greenish or bruises greenish. The cap is convex to sunken, with an inrolled margin at first; indigo blue when fresh, fading to pale grayish blue with deep greenish bruises. It has a sticky, yet smooth texture. The latex deep indigo blue becomes dark green with exposure to air.

Grows scattered or in groups on soil mostly (but not exclusivly) in oak and pine woods. Indigo Milk Caps are a well-known edible and common fungus with a vast population globally. It has been widely and frequently observed in 137 countries.

Spore print is cream. When magnified, spores are broadly elliptical to round.

July to October depending on location.

Gills are attached, broad, and the spacing is close. They are dark blue, becoming paler, staining blue-green when bruised.

Lactarius indigo is edible, be sure to cook it if fresh. When cooked it often stains green and will stain whatever it is cooked with as well. The flavour is similar to a portobello when cooked, but with a grainier texture. It dehydrates well for later uses. This mushroom is often sold in China and Central America. In addition to being edible, its bright blue pigment has been used for a variety of uses, including as a basis for fluorescent pigments.