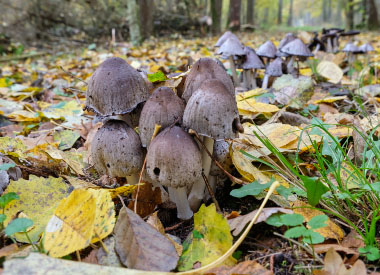 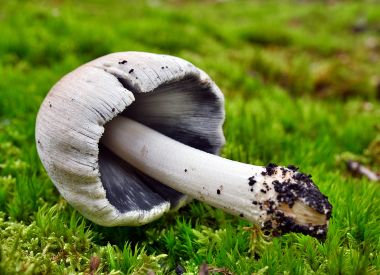 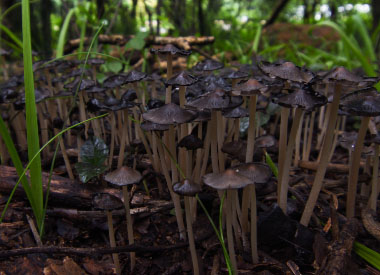 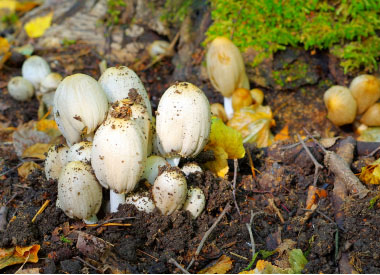 Coprinopsis atramentaria is a very common and easily recognized species in the Psathyrellaceae family. Inky cap is named due to the disintegration of the mushroom cap into an ink-like liquid following spore discharge. In fact, this ink-like liquid has been used for writing. This mushroom is known by many names although Inky Cap is the most commonly used. Other names include Tippler's Bane, Common Inkcap, and Alcohol Inky.

Inky Caps have a smooth to longitudinally wrinkled or scaly, silvery gray to brown cap. The cap is bullet to bell-shaped. When it first appears the cap is egg-shaped and as it matures is expands to become bell-shaped with a slight umbo before deliquescing from the margin. Once it ages, the cap turns black. On average the cap reaches a diameter of 3 to 7cm (1 to 3"). The stipe is white with reddish-brown fibrils towards the base, has an 8 to 15 mm ( 0.31 to 0.59") diameter and measures anywhere from 5 to 12 cm tall. The stipe is hollow, with a white annular zone near the base. Inky caps often occurs in dense clusters.

They typically grow on a wood substrate or on dung. They are saprobic mostly occuring on decaying wood or on the ground from buried wood. Coprinopsis atramentaria grows throughout the Northern Hemisphere, including Europe, North America, and Asia.

Gills are free, white when young, crowded, becoming brown then black and inky at maturity.

Although these can be cooked and consumed, inky caps come with a warning. Alcoholic beverages should not be consumed up to 72 hours before or after eating this mushroom. The inky cap causes coprine poisoning which produces symptoms of nausea, vomiting, flushing, rapid breathing, and severe headache.