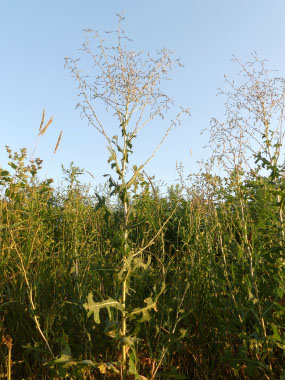 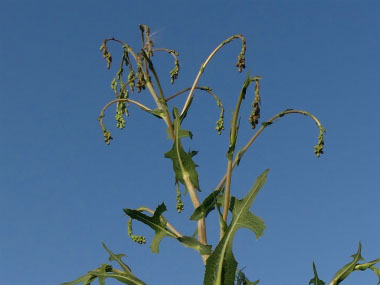 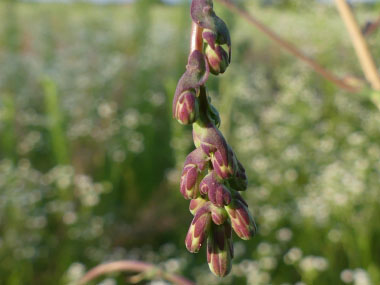 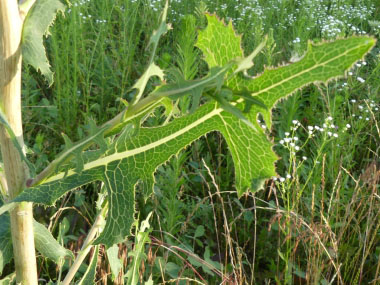 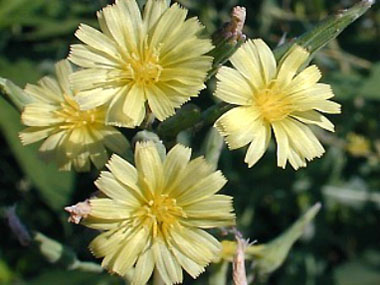 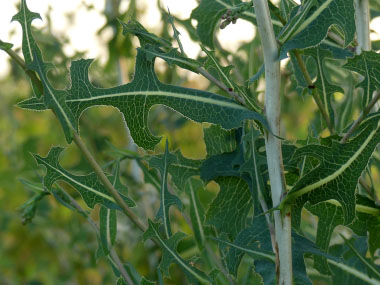 Prickly lettuce is an erect biennial (rarely an annual) that is in the Asteraceae family. Originally from Europe and Asia, prickly lettuce is estimated to have arrived to North American shores around 1860. It did not take long before it made its way throughout most of Canada and over much of the U.S. It is also known at the wild opium or compass plant. Its basal leaves often twist and face the sun such that leaves point north and south, hence the origin for the common name 'compass plant'. Species of wild lettuce fall into one of two large groups; those with yellow flowerheads versus those with light blue flowerheads. Prickly lettuce belongs to the former group. Prickly lettuce differs from Lactuca canadensis (tall or Canada lettuce) by its blue-green foliage and the prickles on the undersides of its leaves.

Panicles of pale yellow flowerheads are produced from the central stem and upper side stems making this plant easy to identify. Although the leaves have prickles, they are not like a thistle that can cause a lot of discomfort. This plant can grow quite high allowing it to be easily spotted.

Many small flower heads, each borne singly at the end of a short branch, are grouped in open terminal clusters. Unopened flower heads resemble a tight green teardrop. Opened flower heads are less than 1cm (1/2”) wide and consist of 5 to 12 yellow ray flowers. The plant blooms from July until well into autumn. Only about a third of the flower heads open at a time. Flowers mature into small, fuzzy seed heads from which pappus-bearing seeds disperse.

Fields of Nutrition has medicinal benefits and vitamin/mineral content of Prickly Lettuce.

Leaves are alternate (1 leaf per node), 15 to 30cm (6 to 12”) long, coarse, and variable in size and shape. Basal leaves are larger than stem leaves. Leaves located on the lower part of the stem may be deeply or irregularly lobed. Leaf bases typically consist of ear-like lobes that clasp the stem. The upper leaf surface is hairless, but there are prickles along the edge, and the midrib on the lower leaf surface is lined with sharp prickles. Prickles are generally absent from upper stem leaves, which are small, lance shaped, and lack lobes. The prickles on the leaves are somewhat soft and incapable of cutting skin.

Flowering stems can reach heights anywhere from 60 cm to 2 metres tall (2 to 7'). Stems are stiff, hollow, and filled with milky juice. Stems are usually leafy and may bear a few prickles on the lower portion. The stem surface is covered with a waxy coat giving it a whitish cast and it is sometimes flecked with red.

Young leaves can be eaten raw or cooked. The young tender leaves are mild and make an excellent salad, but the whole plant becomes bitter as it gets older, especially when it flowers. Young shoots can be cooked and used as an asparagus substitute. It is highly adviseable to eat only smalll quantities. Large quantities are known to cause digestive upsets. Also, it is suspected that the high levels in nitrates in Lactuca Spp are responsible for kidney failure in young ducks.