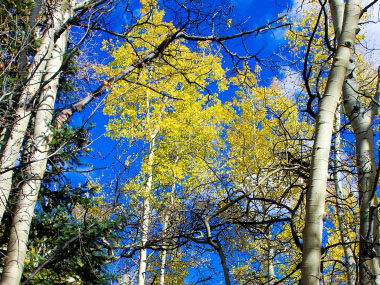 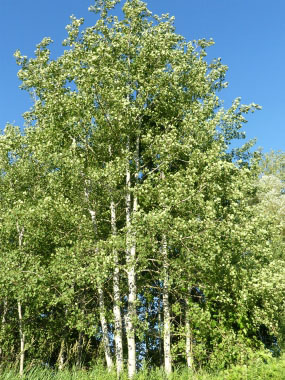 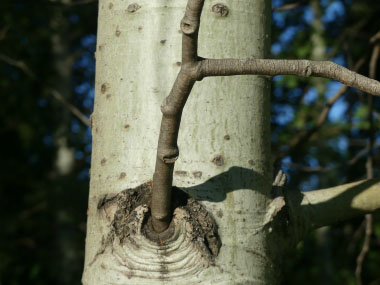 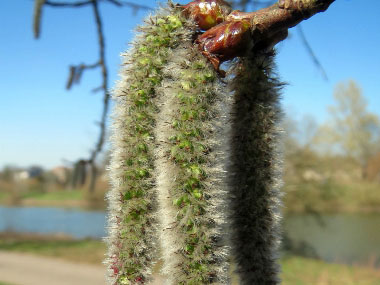 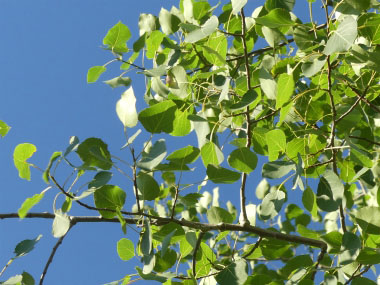 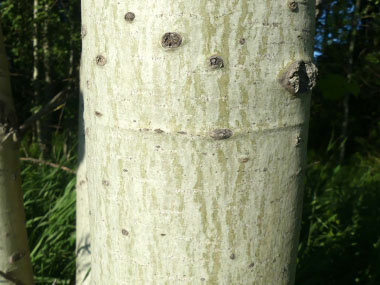 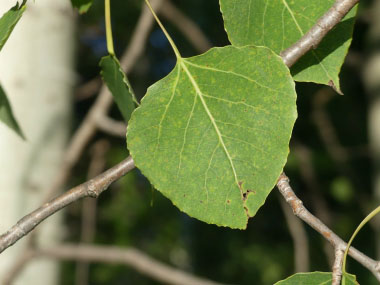 Populus tremuloides, commonly called quaking aspen, is perhaps most noted for its beautiful white powdery bark, its deep green foliage that quakes in the slightest breeze and its golden yellow fall foliage colour. Interestingly, the leaves have a flat petiole which is stronger in one direction than the other which allows the leaves to flutter in the slightest breeze. It is this fluttering that gives this tree its common name quaking or trembling Aspen. Quaking aspen wood has a multitude of uses from canoe paddles to helping with health issues. This tree hybridizes naturally with big tooth aspen and white poplar. Other names this is known by include golden aspen, mountain aspen, poplar and trembling poplar. Quaking aspen is in the willow (Salicaceae) family.

Trunk bark is variable, depending on the age of a tree. On a mature tree, the bark at the base of the trunk is coarse, gray, and furrowed, becoming more smooth and light-coloured above. On immature trees, the trunk bark is white to light yellowish gray and relatively smooth; there are usually black horizontal rings and scattered black knots along the trunk.

Leaves grow alternate, simple, 2.5 to 7.5 cm (1 - 3") long, green above and lighter below, heart-shaped to nearly round with a fine-toothed margin and a pointed tip. The petiole is flattened.

Flowers appear before the leaves in the spring as catkins with male and female flowers on separate trees (clones). Seed pods mature along the central stem of the hanging female catkin.

Catkins are 5 to 10 cm (2 to 4") long, with attached light green capsules which contain many small hairy seeds.

Quaking aspen is generally found in well drained fertile soils yet it can grow in areas with heavy clay soils (but the trees are much smaller). This tree is one of the most wildly distributed trees throughout North America. Quaking aspen also tends to be a disturbed habitat species, meaning it often lives where avalanches, mudslides and fires occur frequently. Quaking aspen spans an elevational range from sea level on both coasts to 3,505 metres ( 11,500') in northern Colorado. Trembling aspen can form expansive colonies by sending up new trunks as an old trunk dies. One colony in Utah is estimated to be over 80,000 years old.

Much of the tree is edible. You can eat the inner bark and cambium but it is best in the spring. It can be dried, ground into a powder and used as a flour. For those who have used it, they say that this flour is normally mixed with other flours for making bread. It also can be used as a thickener for soups. This tree can be tapped for the sap and it can be made into syrup. Catkins can be consumed raw or cooked. At on time the ashes were used as a source of salt. The white powder on the bark has reportedly been used as yeast. Although useful, this is a tree that is conside red as famine food. The buds are a good source of calcium, fibre and vitamin A.