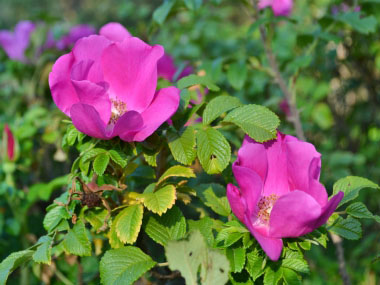 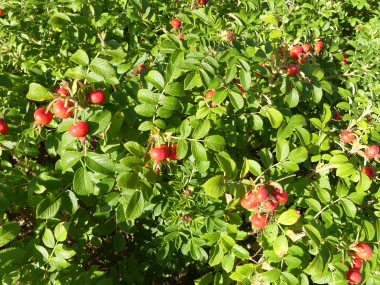 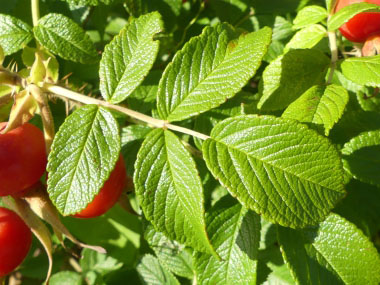 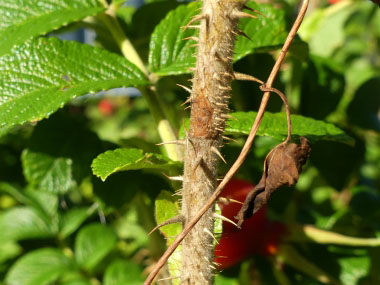 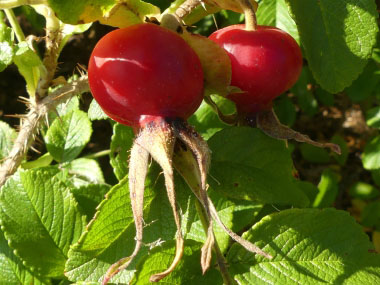 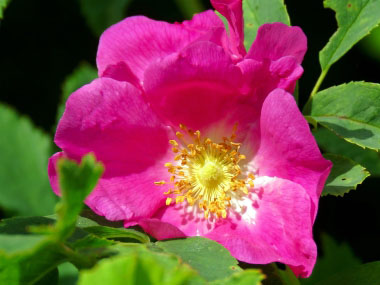 In the Rosaceae (rose) family, this shrub has a reputation for being prolific in many habitats. Also known as the wrinkled rose, beach rose or the Japanese rose, this common shrub is a popular go-to for foragers in many countries. Rugosa Rosa is noted more than any other rose shrub for its exceptionally large, bright red or orange-red fruits, known as hips. These ripen throughout the summer and are often retained into autumn and winter. This shrub is native to eastern Asia, from the Russian Far East in the north to northern Japan. It is also native to the Korean Peninsula and northeastern China. In fact, in eastern Shandong province (China), it is classified as an endangered species due to over-harvesting.

The main stem of this shrub is densely covered in thick, hairy prickles.

The branches of rugosa are also densely covered in straight, hairy prickles and bristles. The topmost branches are coated with thick bristles.

Leaves measure 7.5 to 15 cm (3 to 6 inches), are pinnately compound, dark green, wrinkly, and deeply veined leaflets that are toothed and oval-shaped. Leaves are hairless and wrinkled above, hairy and greyish beneath. The central stalk of each compound leaf is light green and pubescent; its underside has small prickles.

Regular, large flowers, about 6 to 10 cm (2.5 to 4”) across. They have five petals, five sepals, and many stamens. Flowers are usually purplish-pink, solitary or in groups of two or three. Flowers anywhere from June through late summer. On occasion, some flowers may be white.

The rose hips are dark red or when ripe with long sepals on top. The seeds( or achenes) are encased in large rose hips that are fleshy and tasty. There is a mean number of 62 seeds per fruit (range 20-120).

This shrub grows in many habitats from roadside, to sandy and rocky seashores, meadows, and forest edges. This shrub occurs in eastern Asia, Europe, Australia & N.Z., and in many areas across Canada and the U.S. Climatically, Rugosa rose prefers cold to temperate climates, and has been reported to tolerate temperatures as low as -50°C though this has not been confirmed. Often being coastal, it also prefers higher humidity levels, and it tolerates sea winds, salt spray and soil salinity, and is moderately drought tolerant.

Rose hips are the most recognized part of this shrub as being edible. Well recognized for containing vitamin C, these rose hips boast by far more vitamin C than oranges. The flowers can be used to make beverages or added to salads and to decorate baked goods.