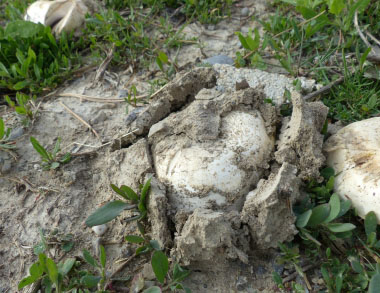 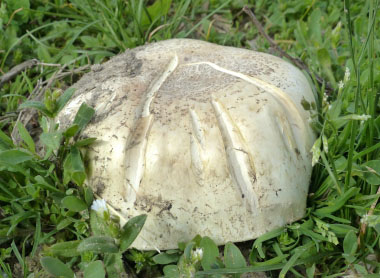 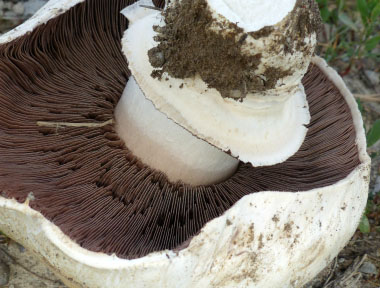 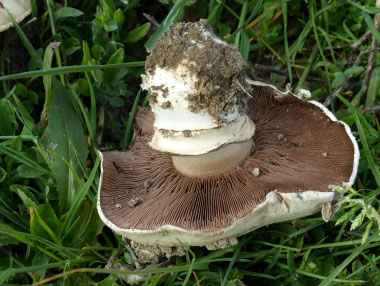 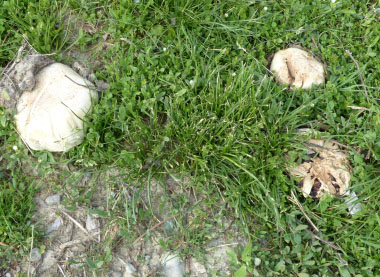 Agaricus bitorquis is a choice edible white mushroom of the genus Agaricus which is similar to the common button mushroom that is sold commercially. It gets its common name from the habit of where it likes to grow, usually by sidewalks, but remarkably it can grow through asphalt. Usually in groups their size, they are quite sturdy and relatively easy to identify. They do not turn yellow on bruising or cutting which rules out the poisonous Yellow Stainer (Agaricus xanthodermus) in the same family. The specific epithet bitorquis is Latin meaning "having two collars", and refers to the two rings resulting from detachment of the annulus from both the top and bottom of the stipe.

Caps are initially convex, becoming flattened. The surface of the cap is white and finely flaky or scaly; the thick cap flesh is white, turning slightly pink on exposure to air. More often than not the cap surface is discoloured by earth, cracked, and in some instances these mushroom actually mature underground or with only a small part of the cap rim visible from above ground. At maturity, the cap diametre is between 5 and 10cm.

Stems are usually 4 to 6cm long and 2 to 4cm in diametre; a membranous double ring persists.

Scattered to gregarious in disturbed habitats, along roadsides, sidewalks and pathways, and vacant lots, most often where salt is applied to combat ice in winter. It prefers heavy, somewhat compacted soils. It is found in many urban and suburban areas of Canada, U.S., U.K., Ireland, several countries in Europe, Australia and New Zealand.

The free gills are narrow and densely spaced; when young they are pale pink. They become reddish-brown to chocolate brown as the spores mature.

Excellent when baked/cooked. It is a substantial size, has firm texture, and and excellent flavour making this one of the best Agaricus species for consumption.