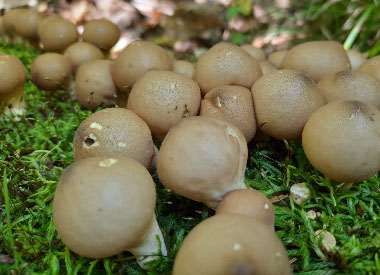 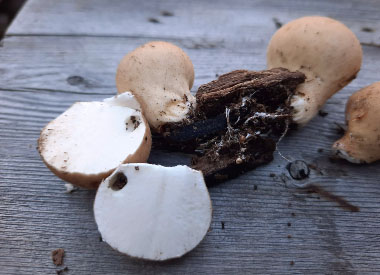 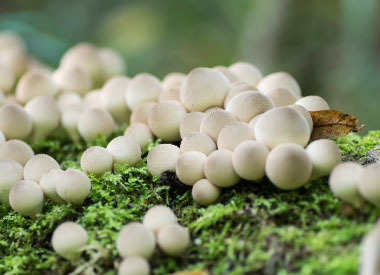 Stump Puffballs are one of the most gregarious of all fungi. The Greek Lykos, meaning wolf, and perd meaning “to break wind” are the origins of the genus name. The species name Pyriforme comes from the Latin Pirum, meaning pear. It is important to remember that the spores have been known to trigger a disease called lycoperdonosis when they are inhaled so care should be taken especially with mature examples. This is not a problem when harvesting young specimens.

The Stump Puffball fruiting body is more pestle or pear-shaped than some other puffballs, they are off white when young but will darken with age (light brown to brown). They develop a darker central umbo as they get ready to release their spores. The flesh is pure white when young turning green/brown with age. The stipe has a similar color to the main fruiting body, is very short and more like an upside down cone. The base of the stipe is attached to the stump by means of root-like strands of mycelium.

These are saprobic, found growing mainly on stumps and roots of dead trees, mostly on hardwoods but sometimes on softwoods. Stump Puffballs may appear to be growing on soil, but there is always rotting wood just beneath the surface.

July to November depending on geographic location. In warmer climates they may grow into December.

Stump puffballs are edible and need to be gathered when they young as they have a firm texture. When young, they have firm white flesh. As they age, the area near the top will turn somewhat yellowish and they are not to be used at this stage. Be sure to choose only fresh young fruitbodies which, when cut in half along the vertical axis, are pure white. Discard any that have begun turning yellow, olive or brown, as this indicates that the spores are maturing and the flavour will be seriously compromised. Stump puffballs have a smell that some do not like, but they have a mild taste. They tend to be very prolific and make a good meal if cooked properly.