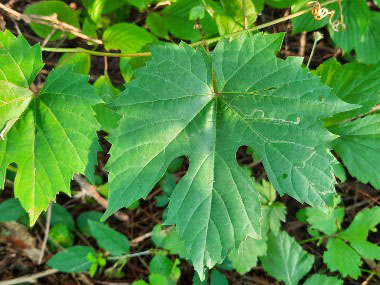 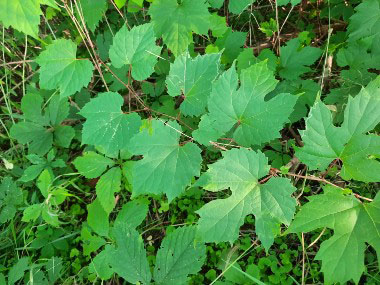 Summer grapes are enjoyed by many including more than 80 species of birds and animals including songbirds, game birds as well as black bear, raccoons and skunks. This vine closely resembles the riverbank grape with the grapes starting to ripe about mid-August depending on geographic location. Vitis aestivalis, commonly called summer grape vine, is a North American grape vine that is native from Maine to Ontario south to Texas and Florida.

This vine has bark that is reddish brown and as it ages it develops long splits with coarse peeling. Stems are mostly rounded, with rounded buds that have two bud scales. It has branching tendrils that grow opposite the leaves, do not have adhesive tips and are generally absent every third node. From a short distance away it looks like a wild grape vine.

Summer grape flowers are green, generally not showy, borne on panicles, appearing in late spring. The flower clusters dangle as fruit develops. Fruit is a round berry, about .5 to 1cm (¼ to ½”) in diametre, ripens from green to blue-black, and is covered in a white bloom. Inside a berry are 2 to 4 slightly flattened, egg-shaped seeds. Berries are often sour until after a frost, then become more sweet-tart. Berries are typically produced in fairly large bunches.

Fields of Nutrition has medicinal benefits and vitamin/mineral content of Summer Grape Vine.

Leaves are 10 to 20cm (4 to 8”) long and about as wide, mostly broadly heart-shaped in outline, shallowly to deeply lobed with 3 or (usually) 5 major lobes and a broad gap between the 2 basal lobes. Edges are toothed, the teeth mostly rounded with a minute point at the tip. The upper surface is dark green and mostly hairless. The lower surface is covered in a whitish, waxy bloom, which is often obscured by reddish-brown, cobwebby hairs; major veins are also densely hairy.

This is a vine that climbs to 22 metres (70’) with its curly tendrils; and like the riverbank grape, it can smother tree canopies.

This vine thrives in dry woods, thickets, in sandy soils. It does grow alongside with the riverbank grape at times although this is less common. It also grows along old fencerows and fields.

Leaves, tendrils, and mature fruit is edible. This vine also has a sweet watery sap that is obtained from the stem. The grapes can be used to make wine, jams, jellies, syrup and juice.