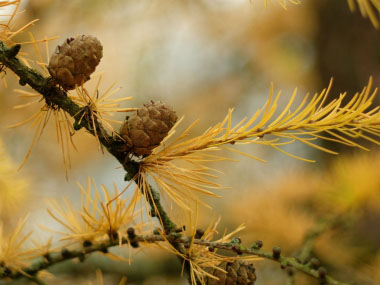 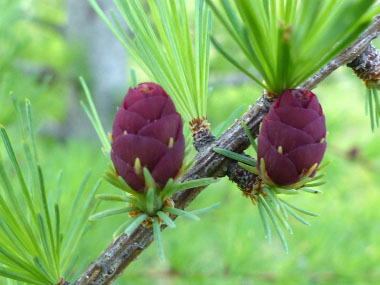 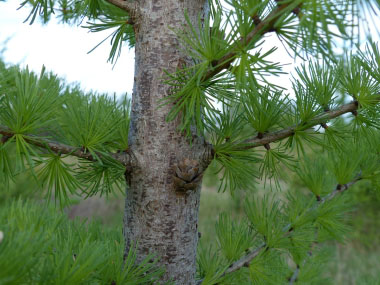 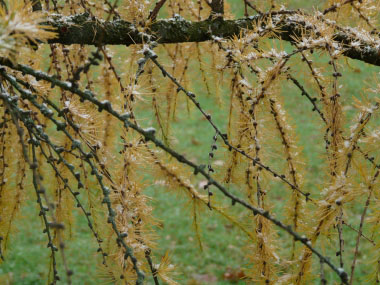 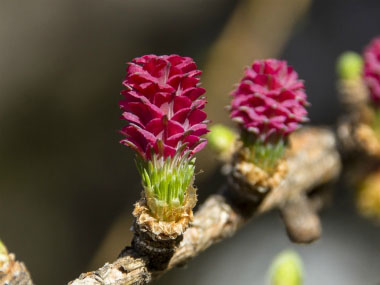 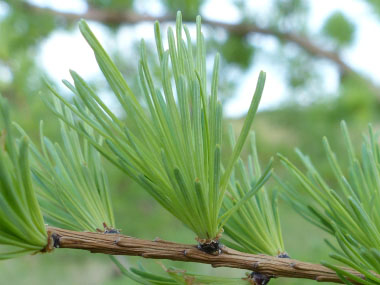 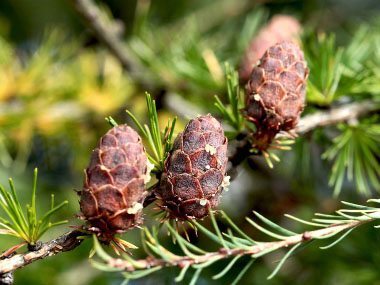 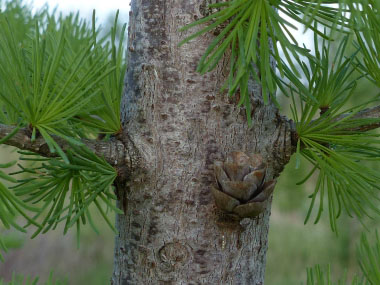 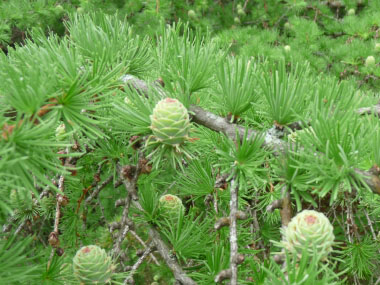 The tamarack, also known as the American larch, hackmatack, or eastern larch is a deciduous conifer, one of only few species of conifers that are not evergreen. It is in the Pinaceae (pine) family. In the autumn the needles of this small to medium sized tree turn a beautiful golden yellow and fall off. The common name of Larix laricina, tamarack, is likely derived from the Algonquian word that refers to a type of wood for making snowshoes. This tree can survive very cold temperatures of -65 degrees C (-85 degrees F) and can live up to 180 years. The tamarack was commonly used medicinally by many First Nations people.

The bark of a young tamarack is grayish to reddish brown with thin, irregular scales. As the tree matures, the bark becomes grayer and more scaly. The inner layer is red-purple.

The branches of the tamarack are somewhat feathery and clustered. They grow horizontal or slightly ascending. Twigs are orange to pink and they are hairless.

The fruit is a small upright cone which stays on the branches for two growing seasons. The seeds which are about 3 mm (.12”) with a 6mm (.25”) wing are primarily wind dispersed. Young cones are reddish-purple and ripen to brown the first year.

Larix laricina is typical of northern bogs but grows in other areas as well. It grows best in moist, acidic, well-drained soils in full sun. It tolerates some light shade and is intolerant of full shade, dry soils and most city pollutants. Tamarack is distributed across most of northern North America. It occurs throughout Canada and into many of the northern and northeatern states.

The tender spring shoots are nutritious, and can be eaten when they are boiled. The inner bark (cambium layer) of the tamarack tree can also be scraped, dried and ground into a meal to be mixed with other flour. Some references indicate it is an ‘acquired’ taste, while other references imply the gummy sap that seeps from the tree has a very good flavour when chewed. Fresh needles can be used to make tea.