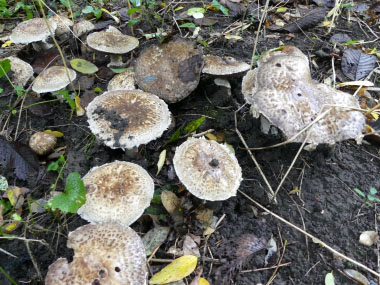 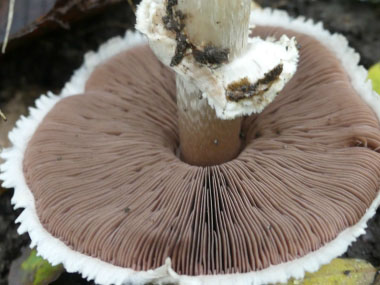 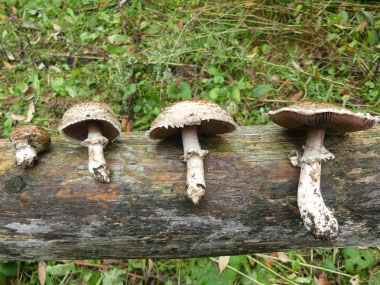 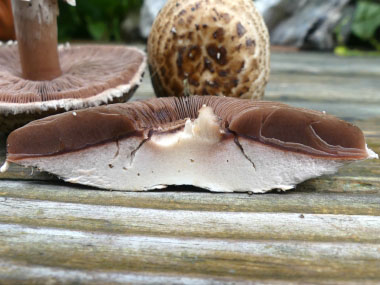 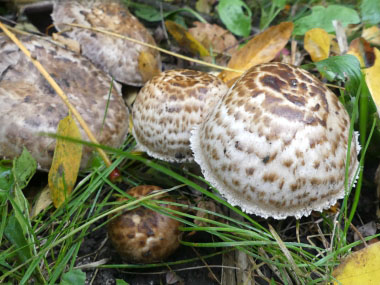 The prince is a distinctive mushroom because of its size, the brownish scales on the cap, the scaly stem, and the strong scent that is similar to almond extract. The prince is a common and popular edible mushroom in many areas around the world. It often appears in summer, particularly in well watered areas. Even when found in the forest, it is generally in disturbed areas, such as campgrounds or along trails or roads.

The cap of the prince is spherical when young becoming convex. Covered in concentric chestnut brown scales on a white to pale yellow background, the cap is quite easy to spot. The cap grows anywhere from 10 to 20cm across. The flesh is white sometimes with a yellow tinge where cut or bruised. The prince also has a large pendulous skirt.

The stem can grow between 10 and 20 cm tall. The stipe (stem) measures between 2 – 4 cm thick. Stems are white to pale cream and smooth above the skirt and usually covered in small brown scales below.

These mushrooms can be found along the edges of coniferous and deciduous woodland areas. The prince commonly grows in western North America, and sporadically grows in some areas of Ontario and the north east U.S. They also grow in Central America, Europe, China, Pakistan, Australia and New Zealand. These mushrooms can also be cultivated.

Spore prints are dark purple to a chocolate brown (usually dark brown) and are ellipsoid.

Early summer into late October depending on location.

Gills start off white to pink and as they mature they become dark brown. Gills are crowded and are not attached to the stem.

The prince has a very pleasant distinct smell which some say somewhat resembles almonds. They are edible but as with all wild mushrooms they are to be cooked before consumption. Many who eat these say they are quite tasty.