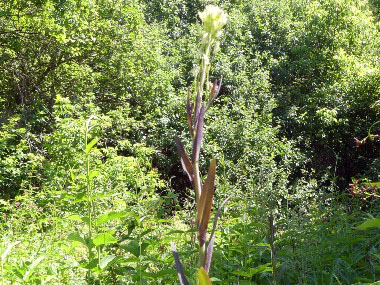 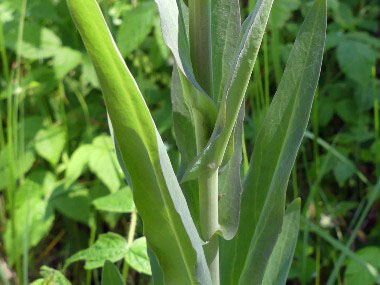 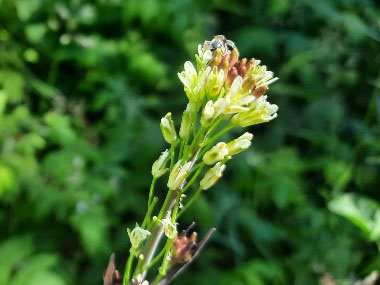 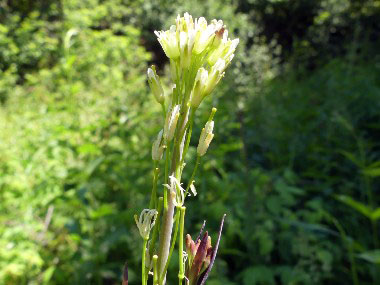 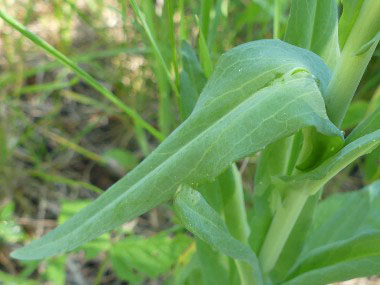 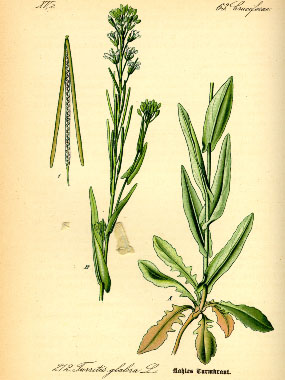 This is a unique plant in the Brassicaceae (mustard) family. Tower mustard is native to North America as well as Europe, Asia and northern Africa yet in some areas it may not be seen as frequently as in other areas. It is a biennial or short-lived perennial plant. Among the various Rock Cresses (Arabis spp.), Tower Mustard is mostly likely to be found in black soil prairies, although it does grow in other kinds of habitats. The tower-like inflorescence gives this mustard plant an odd appearance that is quite striking. Because Tower Mustard is a somewhat rather robust plant, it is surprising that this species is not more common.

The tall tower-like structure of this plant is what catches the eye first. The blue-green appearance stands out as does the purplish coloring as it ages. Being in the mustard family of plants that means the first-year growth is a rosette of basal, grayish to green leaves.

The flower structure on the Tower Mustard is an elongating raceme, with blooming flowers in a small flat, compact cluster at the top of the stem. These flowers are small, about ½ cm (1/8 inch) long with 4 creamy white to white colored petals, 4 green to yellowish sepals and several yellow stamens. The petals spread open but typically they're often seen only poking out of the sepals. One plant typically has multiple flowering branches. The bloom period for this plant occurs during late spring to mid-summer and lasts about 1½ months.

Fields of Nutrition has medicinal benefits and vitamin/mineral content of Tower Mustard.

Stem leaves can grow up to 7cm (3”) long and 2.5cm (1”) wide, usually have a lance-like shape, are toothless, mostly hairless except perhaps around the edges, with a pointed tip and a pair of lobes at the base that wrap around and clasp the stem. The leaves become smaller as they ascend the stem. There is a waxy powder that gives the leaves at the top a blue-green appearance. Basal leaves are more spatula shaped with a blunt tip and shallow lobes.

This plant can grow anywhere from 30cm to well over 1 metre (1 to 3'). The stem is mostly smooth and light green, often also with a bluish cast.

Leaves are edible although first year leaves or leaves before the plant flowers is better tasting.