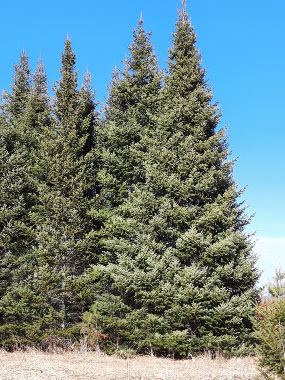 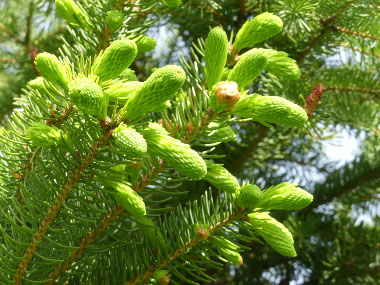 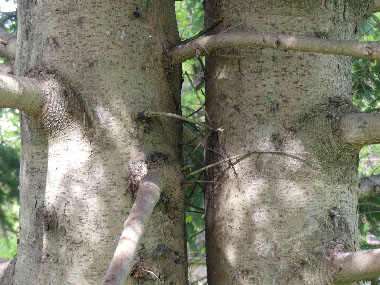 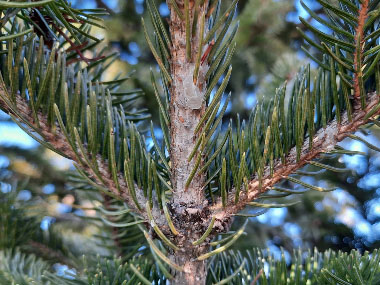 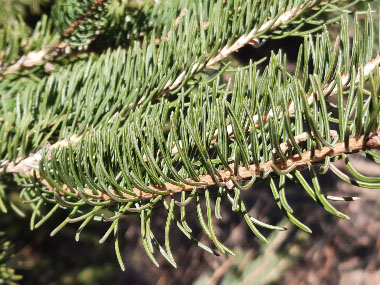 White spruce is a large, pyramidal evergreen with aromatic foliage and uniform habit. The white spruce tree is native to North America, with a northerly distribution; often found on richer sites than other spruces. Mostly a family of the northern hemisphere, the Pinaceae have nine genera and about 210 species. White and other spruces live for over 200 years. The genus name Picea is the classical Latin name for the 'pine' but Linnaeus assigned it to spruces. The species name glauca, is from the Greek and means 'gray' or 'bluish-green' referring to the leaf colour.

Mature bark is loose, scaly, and greyish-brown. Younger trees have bark that is thin and gray, sometimes with flaky scales. Trunks can reach up to one metre (36”) in diameter at about the height of almost 2 metres (6’).

Needles are four-sided, sharp, and stiff. They are arranged spirally on the twigs; whitish-green and not pleasant smelling when young. As they mature, they emit a pleasant scent. Each needle is individually attached to the branch and can be rolled easily between your fingers. The needles measure about 2cm long (3/4”). White spruce has longer needles than black spruce, but this doesn't help much unless you have two samples in-hand to compare. The best way to distinguish between these two similar species is to observe the habitat. If the tree is standing in a wetland or bog, it is probably black spruce.

Male and female flowers are cone like structures called strobili, both borne on the same tree at or near the tips of one year old branches. Male strobili are oblong-elliptic, about 1.5cm (½”) long, initially purplish and erect, turning yellowish-brown, hanging down on a short stalk and withering away soon after releasing pollen. Female strobili are purple, erect when young, about 2cm (5/8”) long, elliptical to barrel shaped.

Seed cones are light brown to purplish and hang from the upper branches. The seed scales have a smooth, rounded outer edge. Pollen cones are pale red. The seeds are black, small, with a slender, long pale brown wing.

The white spruce grows throughout Canada and the northern and northeastern states. White spruce typically occurs on riparian, upland, and treeline sites, although it occurs on a wide range of other sites as well. It grows best on well-drained soils but occurs on a variety of land forms and soil types. It prefers sunny locations and can grow as far north as Alaska, the Yukon, NWT and Nunavut.

Young spruce tips in spring can be eaten fresh or cooked. They can be used in a wide variety of recipes. The needles are frequently gathered when fresh in the spring but can be used at any time of the year. They can be dried and ground into a powder for use in baking or use needles to make tea.