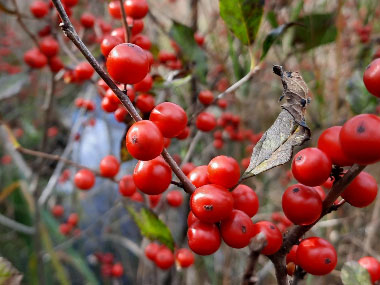 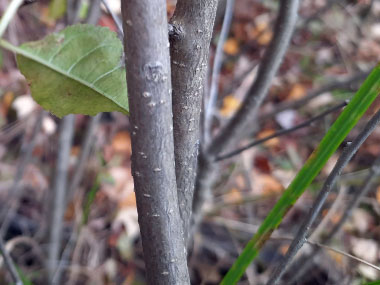 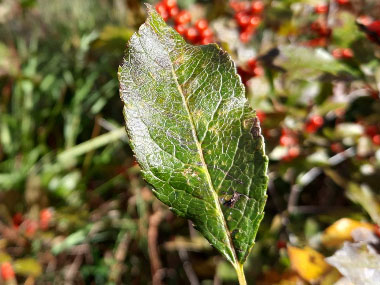 Winterberry is an upright, deciduous shrub that is somewhat rounded and can be as wide as it is tall. It is a slow-growing, and it often suckers to form large thickets or colonies. The berries are enjoyed by over 40 species of birds, including songbirds, winter waterfowl, and game birds. The shrub is a favorite of small mammals who enjoy the berries and seeds. Berries are quite showy and will persist throughout the winter (hence the common name) and often into early spring. This shrub is in the holly family of shrubs (Aquifoliaceae). Winterberry is commonly referred to as black alder or winterberry holly.

The bark is smooth, thin and grey but may become rough with age.

Twigs are thin, grey but can become brown in winter.

Winterberry typically grows anywhere from 2 to 4.5 metres (6 to 15’) tall depending on the age and location.

Being a deciduous shrub it loses its leaves in the autumn. Dark green leaves grow alternate, are elliptic to obovate, toothed, and measure 5 to 7cm (2-3”) long. Fall color is usually negligible, but in sometimes the leaves may turn to attractive shades of maroon. There is one leaf per node along the stem.

Winterberry produces large quantities of bright red berries that remain on the shrub through the autumn and into the winter. Berries measure about 0.6cm (1/4”) in diameter.

Although this has become a cultivated shrub, winterberry grows wild in acidic soils in forested wetlands or along edges of ponds, lakes and marshes. Winterberry thrives in wet areas, particularly in swamps and marshes. Its native range is in central and eastern North America.

Only the ripe fruit is edible.