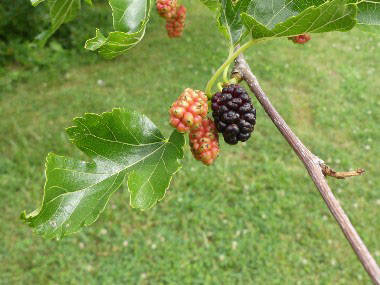 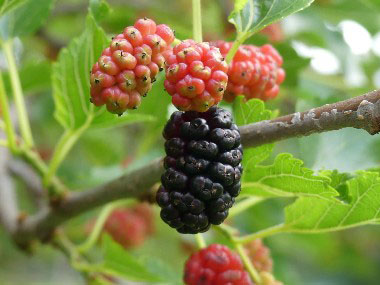 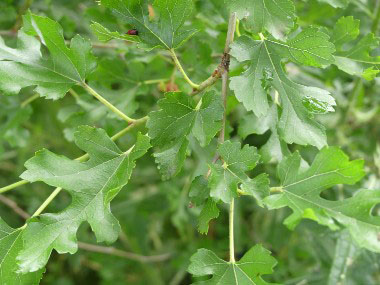 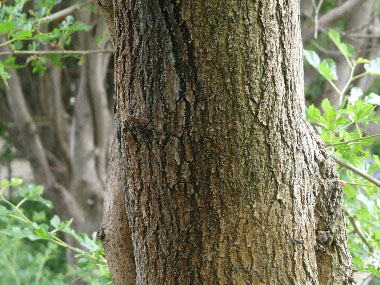 Native to China, this tree in the Moraceae family was introduced to North America in the 1600’s. In 1624 the legislature of Virginia required every male resident to plant at least four white mulberry trees to promote a North American silk industry. By the 1830’s, the potential for a silk industry prompted a horticultural phenomenon known as "mulberry mania" in the eastern United States. In the late 1830’s, white mulberry plantations in the Northeast were seriously damaged by cold winters and many in the South were killed by disease, halting further planting of this tree. White mulberry is a multipurpose tree widely planted in tropical, subtropical and mild temperate regions of the world for fodder and silkworm rearing, and for fruit and timber production. It is generally a short-lived tree although there are some specimens known to be over 250 years old.

White mulberry has a short trunk that is often crooked and forms a rounded crown with a dense canopy of spreading branches. The thin bark is light brown to grey, smooth but may be shallowly furrowed and has long, narrow ridges. On very old trees, the bark becomes gray and coarse with curving deep furrows.

The bark of branches and twigs is brown to orange-brown, smooth, with scattered raised lenticels. New growth is slightly hairy becoming hairless the second year with the lenticels flattening out and turning whitish. Bark is thin and somewhat rough, turning gray to gray-brown with maturity. Twigs exude a milky sap when cut.

This tree typically grows to 15 metres (50 ft) in height.

Leaves are alternate, 6 to 18 cm long, 5 to 13 cm wide, broadly ovate, dentate or lobed with three prominent veins running from the rounded or obliquely cordate base. Leaves are shiny green on the surface, paler and can be slightly hairy underneath.

White mulberry generally flowers from April to May, with earlier flowering in March in the Carolinas, and later flowering into June in the upper Midwest. Depending on location, white mulberry fruits begin forming in May and may continue developing into late July. Dioecious, male inflorescences are small with 4 stamens, filaments inflexed in bud, green and borne on long catkins. Female flowers are inconspicuous, perianth with four free or almost free segments, aggregated in short spikes.

Fruit is an ovoid or cylindrical drupes, red when immature, blackish-purple, purple or greenish-white when mature. They grow to about 1 to 2.5 cm long (0.5 to 1”).

This tree grows in all states with the exception of Nevada and Alaska. In Canada it grows in Ontario Quebec and British Columbia. It also grows on all continents with the exception of the Antarctic. It can be found in older fields, roadsides, forest edges, urban environments, and other disturbed areas. It prefers a warm, moist, well-drained loamy soil in a sunny position. In the Great Lakes region, white mulberry occurs most frequently in mixed-hardwood forests. It readily grows and even thrives in inhospitable locations.

Fruit and the young leaves are edible.