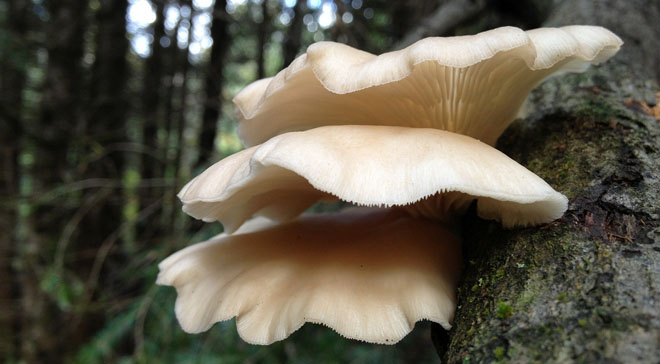 April showers do bring May flowers but they also bring a wealth of fungi for the mushroom foragers. The season got a bit of a late start here in Ontario this year but make no mistake, the bounty was well-worth waiting for!

There are three popular edibles that are widely sought-after, Oyster mushrooms, Dryad’s Saddle and Morels. First and foremost, always use minimum three credible sources when identifying fungi and you must be 100 percent certain that what you think you have, you actually do. There can be look-a-likes out there and you may not get a second chance if you make an error in identifying.

IMPORTANT! All mushrooms, with the exception of truffles, must be cooked to best take advantage of their beneficial nutritional properties while deactivating heat-sensitive toxins.

Below is basic information to help you get started on how to identify this bountiful food! Please be sure to refer to other resources to confirm identification before consuming.

Morels fruit most abundantly on disturbed or recently cleared ground. They can be found under elm trees that have just died, or in wood chip mulch that is up to two years old. A plentiful crop of morels does not mean that they can be found in the exact same area in subsequent years because morels get bored and enjoy traveling. Caps usually begin to appear in April in many areas across Canada and the U.S.  Due to their appearance, morels are sometimes called the sponge mushroom.

Morel caps look like a sponge with inverted texturing and the stems are hollow.  BE AWARE that there are False Morels; the caps resemble a brain and the stems are not hollow. No matter what specific type edible morel you have found, all kinds must be cleaned and cooked in order to consume.

Avoid morels with caps that are soft or mushy, or become granular when rubbed; this means they are too old and wormy. Morels occasionally contain insect larvae that drop out during the drying process.

These bracket fungi have a beautiful funnel-shape. The younger caps are preferred when eating because they are tender; mature caps have tough flesh especially near the attachment point. Although mature fungi can be cooked and eaten, they will have a rubbery texture. Older Dryad’s Saddles become maggot ridden and end to turn into a smelly mess.

Individual caps of these fungi grow between 10 and 60cm in diametre and are 5 to 50mm thick. The cap surface is beautifully patterned with large brown scales.

They often grow in tiers and the caps are attached to the tree by a short lateral stem that appears darker towards the base. Beneath the tan/yellowy upper surface the cap flesh is white and tough.

Oyster mushrooms are native to deciduous hardwood and conifer trees, although they tend to prefer beech and aspen trees. Recognized as wood decomposers, they are ubiquitous in forests all over the world. Fruiting in the spring and fall, oyster mushrooms are enjoyed by many people. 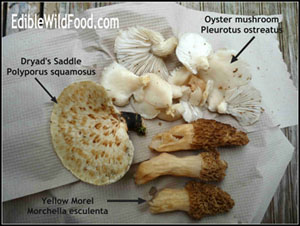 Oyster mushroom caps are either oyster-shaped or fan –shaped and generally measure 5 – 25 cm across. They often grown in a shelf-like formation and they are smooth.  This mushroom has white decurrent gills which means the gills are attached to and run directly down the stem.

These do not always have a stem. If they do, it will be stubby and off-centre if the mushroom is growing on the side of a log.