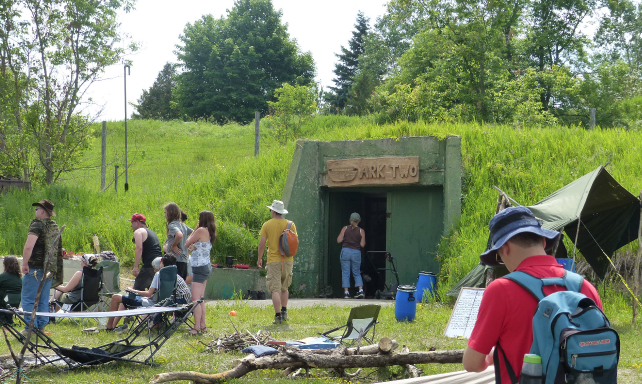 (Bruce had a heart of gold. Sadly, this kind and selfless man suffered a massive heart attack on Monday, May 10, 2021 and in the early hours of Tuesday, May 11, 2021 Bruce passed away. Rest in Peace Bruce.)

The most recent fear that has enveloped so many people is the possibility of another global conflict. In reality this is an ongoing fear that has plagued us for decades. During the 70’s Bruce and Jean Beach were not going to sit idly by while tensions between the U.S. and Russia increased. They thought nuclear war or some other global catastrophe could happen in their lifetime and they wanted to make sure that should something horrific happen, people, especially children would have a safe place to take refuge.

In addition to foraging for wild plants there‘s always foraging for edible insects as a source of food. Cricket flour is not too bad tasting and the goldenrod gall has a rather pleasant taste. Eating insects may sound repulsive to many, and for some this is part of their cultural cuisine, but to a person who is in need of food, insects will be welcomed.

Some people ask what will happen if a nuclear bomb is dropped? This isn’t an easy question to answer as there are so many “if” factors that come into the equation. If you are at ground zero then there won’t be anything living for several years – read up on the history of Chernobyl.