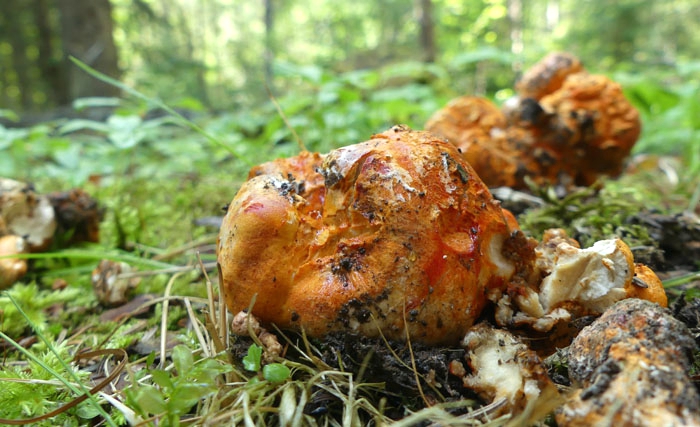 Lobster mushrooms have a distinctive taste that some describe as being lobster-like; however, most people claim the wonderful aroma and taste is more nut-like. This edible fungus is called the lobster mushroom because of its appearance being similar to a lobster: dark orange on the outside with white inside, not because of its taste. Lobsters are a choice edible mushroom that is delicious and meaty.

The dark orange exterior of this mushroom is the stromatic sterile tissue of the ascomycete (Hypomyces), and the white flesh on the inside is the flesh of a basidiomycete mushroom; usually a Russula. In a funny way this fungi can be considered being the result of mycological cannibalism.

The parasitic fungus Hypomyces lactifluorum infects and colonizes the non-edible mushroom Russula brevipes transforming it into the lobster mushroom. It can also infect the acrid-tasting Lactarius piperatus.

In a pioneering study in Botany, Genevieve Laperriere and colleagues from the University of Quebec tracked the infection process and colonization of Russula brevipes by the parasitic fungus Hypomyces lactifluorum. Laperriere and his team extracted DNA from infected (edible) and non-infected (non-edible) mushrooms collected from various sites around Quebec. They found that the infected and edible lobster mushroom mostly contains the DNA of the parasitic fungus with only trace amounts of Russula brevipes DNA.

Laperriere and his team also measured intermediate products of chemical reactions, or metabolites, in infected and non-infected mushrooms. Metabolites help determine how fungi look and taste, and whether they are fit to eat. They found that through the course of its infection, the parasitic fungus completely alters the diversity and amount of metabolites in Russula brevipes.

Lobster mushrooms are rich in ergothioneine, (an amino acid), which is a strong antioxidant that provides protection from the action of free radicals that can mutate cells, while improving the reaction of the immune system. Ergothioneine has sulfur in its structure. Despite sulphur being a common element, many people have a deficiency of sulfur. (Sulfur is the eighth most common element by mass in the human body, behind oxygen, carbon, hydrogen, nitrogen, calcium, phosphorus and potassium.) This antioxidant compound is only found in mushrooms and provides a significant boost to the immune system.

Natural antibiotics with a similar structure to penicillin are found in all types of mushrooms. They stop the growth of germs and can also defeat fungal infections. Most of these compounds are beta-glucans and polysaccharides that also provide an immune system boost, as well as cure ulcerous wounds or ulcers and healing their infections.

Lobster mushroom can be harvested mid-summer to early autumn depending on location. They are typically found in forests with oaks, poplars and other deciduous trees. If you find lobster mushrooms in one area, they will appear in the same location the following year.

Cloth bags are best to use while gathering. Always carry a soft bristle brush (or new toothbrush); this is very useful to clean the dirt from the mushrooms. Cut them as low along the stem as you can, but try not to just pull them from the ground. The mycelium that connects them to the soil should be left undisturbed. Keep in mind that washing mushrooms will make them absorb water, which makes them soggy. Lobsters are best cooked after being cut into small pieces. 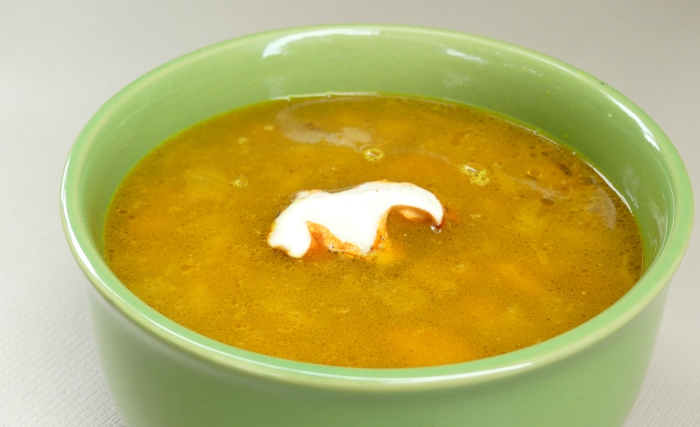 As with other fungi, be sure that what you harvest is the lobster mushroom! Never consume any edible wild mushroom raw – always cook first!

About the Author
Karen Stephenson is an author, professional writer, wild food educator, and a certified Master Naturalist. Foraging and being outdoors are her passions.
Social Share
12 Comments