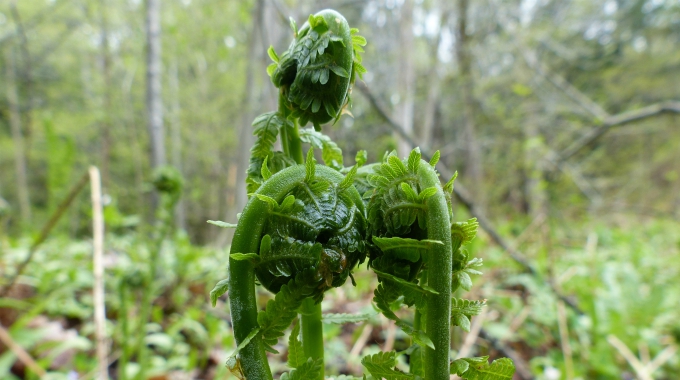 Fiddleheads are commonly referred to as the curled, edible shoots of the ostrich fern (Matteuccia struthiopteris) and are considered a seasonal delicacy in many parts of Canada, the United States and in some European countries. These curled crosiers are a highly sought-after green in the springtime yet there are many reports out there about people getting poisoned as a result of eating these. All these reports come from those who have consumed fiddleheads that were purchased, not foraged for individual purposes. However this does not negate the fact that food safety is paramount.

Fiddlehead is a common name given to any fern as it emerges. Most types of ferns have fiddleheads, so it’s important to be sure you can expertly identify the ostrich fern before you go foraging. The word fiddlehead was adopted because the young curled leaves look like the scrolls of fiddles. This is very important to remember – not all fiddleheads are the edible ostrich fern!

There are some other species of ferns that are edible, and some are commonly used in herbal preparations. Unless you are an experienced forager then be sure to keep your focus on learning about just the ostrich fern. (For information on wow to properly identify an ostrich fern fiddlehead click here.)

Most ferns are not edible and many poisonings or illnesses that foragers experience is the result of improper identification. There are two videos that EdibleWildFood.com has on YouTube that are well worth watching to help you identify ostrich ferns correctly. (Fiddlehead Hunting Part One and Fiddlehead Hunting Part Two.)

Few wild plants are as polarizing as the bracken fern (Pteridium aquilinum). It is a global species, living almost everywhere but the harshest deserts and the coldest tundra. It is considered edible by some and apparently the Japanese have been eating this fern for hundreds of years.

Bracken ferns are reported to be edible yet eating bracken ferns or drinking milk from bracken-fed cows, seems to be linked to many cases of gastric cancers. Studies show that the Japanese have a very high rate of gastric cancer. Whether there is any connection to the bracken fern or not, this writer is not aware of this. It is up to the you, the reader, to research this fern extensively. This writer suggests focusing only on the ostrich fern.

Ferns are one of the few edible plants known to cause cancer in animals.

How to Gather, Clean and Preserve Fiddleheads

Harvest tender ostrich ferns as soon as they are no more than 5 cm (2”) above the ground. Carefully brush off and remove the papery brown scales.

When picking fiddleheads, make sure to harvest them into clean containers. Use potable water when cleaning the fiddleheads and never use water from streams or rivers. Refrigerate your harvest as soon as possible to maintain freshness. They will remain fresh for up to ten days.

Are Fiddleheads Healthy For Us?

Ostrich ferns score an impressive 1097 to 1849 ORAC value (Oxygen Radical Absorbance Capacity). The ORAC score is a method developed by scientists at the National Institute of Health and Ageing (NIH) to measures the antioxidant capacity of different foods. Fiddleheads rate higher than blueberries, cranberries, strawberries, blackberries, cherries, plums and raspberries.

A study published in the Canadian Journal of Plant Science showed that ostrich fern fiddlehead
tissue is a rich source of ascorbate, alpha and beta carotene, a- and g-tocopherols, lutein, violaxanthin, zeaxanthin and phenolic compounds. Ostrich fern fiddleheads also have a high and unusual fatty acid content, which includes the omega-3 eicosapentaenoic acid, and the omega-6 arachidonic, g-linoleic and dihomo-g-linolenic acids.

Without a doubt, ostrich fern fiddleheads, when prepared safely, are a healthy seasonal vegetable.

Remember though, regardless of whether you forage for fiddleheads or you plan on purchasing them, always be sure to never eat these raw or if they are undercooked.