Edible Flowers to Grow in Your Garden 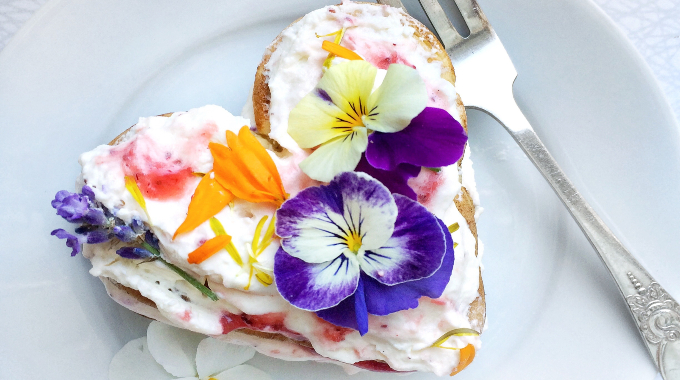 Flowers add colour and beauty to any garden so why not take advantage of what they have to offer us in the kitchen? Cooking and garnishing with flowers were, and still are, quite popular in many countries. When designing an edible landscape, think about adding in edible flowers because flower cookery has a long and most interesting history.

Many individuals think of culinary flowers as a fad, yet edible flowers have an unbroken line of edible and medicinal uses for thousands of years. Their first recorded mention was in 140 B.C., and even today rosewater and orange flower water are used daily in many Middle Eastern and south Asian homes. If you think about it, edible flowers are common including lavender in Herbes de Provence, and of course hops which are used in beer. Saffron, although expensive, is the dried stigmas of the saffron crocus (Crocus sativus). The male sterile triploid plant has been propagated vegetatively for at least 3600 years making this one of the oldest known edible flowers.

Flowers have been used for culinary purposes since as far back as Ancient Greece, Rome and Egypt. In fact, the first recorded mention of edible flowers being used was in 140 B.C. The Romans were known to use violets and roses in their food, the flower petals were commonly eaten in salads or as garnishes.

Ancient Chinese herbalists also recorded both medicinal and culinary uses for flowers. The early Incas, Aztecs and Hindus included flowers in some of their most important rituals.

Nearly every early civilization recognized calendula, whose petals were served as food and piled on alters. Calendula was also commonly referred to as pot marigold by medieval monks, who used it in their cooking pots. In addition, carnation petals were a key ingredient in Chartreuse, a liquor that was created by French monks during the 1600s.

The Victorians often used flowers in their food, associating them with refinement and elegance. Most commonly, the Victorians would use candied violets and borage to decorate cakes and desserts. Violets remain popular today for use in desserts and sweets, most notably in violet cream chocolates. Bee balm, also known as monarda, was used by the Victorians as a treatment for bee stings and was also used (along with other wild plants) as a substitute for tea when black tea became unavailable during the Boston Tea Party in 1773. During the Renaissance, it was common for audiences of plays to be served rose-petal infused water and stewed primroses.

Historically, petals of flowers were dried and included in tea blends. Popular tea flowers were hibiscus, rose, jasmine and bee balm, some of which we still enjoy today. Other countries use flowers for culinary uses today more often than we do here in the U.S. and Canada. For example, in China and Japan chrysanthemum petals are often stirred into soup or included with tea. Sakura, or Japanese cherry blossoms, are also incredibly popular in Japanese cuisine, from flavouring sake and yokan (a traditional jellied dessert).  Papaya flowers are often used in Indian cuisine, commonly included in salads and cooked with potatoes. Banana blossom is also frequently found in South Indian cooking.

Chrysanthemum, also called mums were first cultivated in China about 3,500 year ago, and they have been used for many millennia. Mums got to Japan in the 8th century and are the flower of the emperor’s family. Yellow and white mums (Chrysanthemum morifolium) are the ones usually used in the kitchen. Although the blossoms are boiled to make a sweet drink, raw, they are somewhat bitter. Chrysanthemums are also used to flavour wine. In addition, the leaves are useful in the kitchen as well and are sold in many Asian grocery stores.

What Cultivated Flowers Are Edible?

Grow some edible flowers this and every year. Adding colour and beauty to your meals, desserts and baked treats will bring smiles and joy to all those who enjoy your culinary endeavors!

Be sure to check out Eye Candy Pancakes!