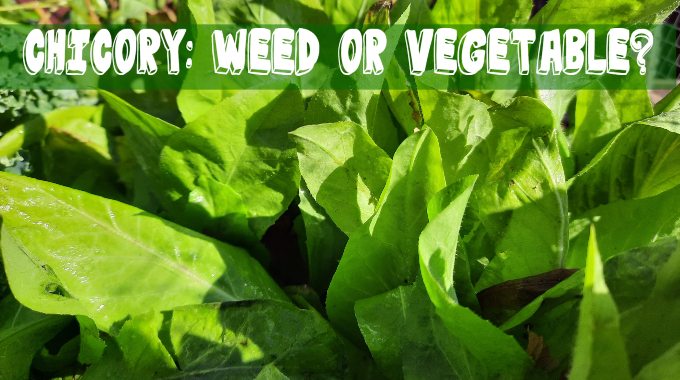 Delicious raw or cooked, Belgian endive, curly endive, escarole, frisée endive and radicchio are part of the chicory vegetable family of leafy greens. Each variety offers an appealing hint (or sometimes more than a hint) of bitterness. But when was the last time you looked at a wild chicory plant and referred to it as a leafy green vegetable and not a weed?

Cichorium intybus is a member of the Asteraceae family and this species is native to North Africa, Asia and Europe. Invited or not, this plant frequents grasslands, disturbed sites, meadows, lawns, waste places, roadsides, and fields.

New rosettes of leaves appear in autumn or early winter, but they will remain that way until springtime. The leaves resemble dandelion leaves and typically persist throughout the winter. When the weather starts to warm up, a tall, slim stem emerges and prepares to bloom.

The chicory stem produces several blooms at a time, but each bloom opens only once. The stem is constantly sprouting new buds, ensuring blooms for most days throughout the summer. These stems can grow between to over 1 metre (3’) tall, so there’s plenty of room for new buds every day. Chicory is not fond of hot weather so the flowers tend to open at dawn or shortly after, but by midday they will close and die off.

Why Forage for Chicory?

Chicory is easy to identify and depending on where you live, there is no shortage of this plant. Beginner foragers may get the leaves confused with dandelion leaves, but that’s ok because they are also highly nutritious. Proper identification will come in time.

The potpourri of nutrients and bioactive phenolic compounds that this entire plant possesses are responsible for the various nutritive, prophylactic, and therapeutic qualities of chicory. Inulin, coumarins, tannins, monomeric flavonoids, and sesquiterpene lactones are some of the major phytocompounds mostly found in chicory plants. The health-promoting activities attributed to chicory comprise, among others, anti-inflammatory, anticarcinogenic, antiviral, antibacterial, antimutagenic, antifungal, anthelmintic, immune-stimulating, and it has antioxidative qualities.

Flowers can be tossed onto a salad for decorative purposes although they don’t offer much in terms of flavour or nutrients. The flowers are useful in creating a brown dye.

According to some herbalists, the flowers are used as an herbal treatment of everyday ailments such as a tonic and appetite stimulant and as a treatment for sinus problems, cuts, and bruises.

Chicory roots can be ground and used as a flour. They can also be roasted and added to create a unique flavourful cup of coffee. Many bloggers say that roasted chicory roots are a coffee substitute. Nothing, in my opinion, can substitute the aroma and flavour of coffee.

It’s thought that the coffee mixed with chicory probably began in the Netherlands and spread across other parts of Europe in the 1800s. Chicory root has traditionally been used in tea or in medicinal remedies to treat issues such as jaundice, gout and rheumatism.

While chicory became a North American interest, coffee became the beverage of choice, and New Orleans became the second largest importer of coffee in the U.S. However, it was during the American Civil War that people in Louisiana considered adding chicory root to their coffee due to the Union naval blockades cutting off shipments to the port.

The leaves contain chlorophyll as well as a wealth of nutrients including omega 3, omega 6, protein, and choline.  Chicory leaves contain vitamins A, B1, B2, B3, B5, B6, B9, C, E, and K. They also have the following minerals:

This is a drought-tolerant plant that can be easily grown in our gardens (see blog image) and should be part of our regular diet. Yes, it will be slightly bitter, but remember, bitter foods support digestion, stimulate the liver, and they help our body absorb certain nutrients.

There is little room for debate in terms of why we need to consider chicory as a valuable vegetable as opposed to a pesky weed.

Be sure to check out my video on how to identify chicory at YouTube!