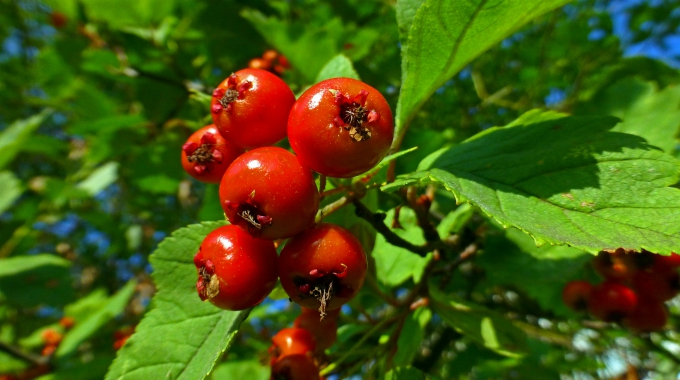 Hawthorn berries are best known in western herbalism as a powerful heart-healthy herb, and are commonly harvested as food by foragers throughout the northern hemisphere, as well as a few locations in the southern hemisphere. Clinical trials and reports from professionally qualified medical herbalists, as well as medical science show there is significant potential as a remedy in the treatment of cardiovascular disease.

Worldwide, hawthorn has been used for millennia as both as a food and a medicine. Dioscorides (approx. 40 to 90AD) called Crataegus “Oxuakantha”, which was retained by Linnaeus in the name Crataegus oxyacantha, an old name for Crataegus laevigata. Gerard (1633), a well-known Renaissance herbalist, called hawthorn oxyacanthus, white thorne, or hawthorn tree. The latter two, and the name maythorn are still commonly used in England. In Germany hawthorn is called weifdorn, while in France it is referred to as l’epine noble (the noble thorn) because it was supposedly used for Christ’s crown of thorns.

Dr. Green, from Ennis, Ireland, secretly used hawthorn for heart ailments. After his death in 1894, his daughter revealed the famous cure to be a tincture of the ripe berries of Crataegus oxycanthus.

In 1901, The British Homeopathic Review revealed that:

” … For many years had a reputation for the cure of heart disease that caused patients to flock to him from all parts of the United Kingdom. He cured the most of them and amassed considerable wealth by means of his secret. For, contrary to the code, he, though a physician in good standing, refused to reveal the remedy to his professional brethren. After his death … (in 1894), his daughter, a Mrs. Graham, revealed the name of the remedy her father had used so successfully. It is Crataegus oxycanthus …”.

In Europe, both homeopathic and allopathic doctors used hawthorns for various heart and cardiovascular ailments from the late 19th through the early 20th centuries – and with great clinical success. Hawthorn entered American clinical practice by 1896, only to fade from use in the 1930s.

Today, hawthorn is an official drug in the Pharmacopoeias of Brazil, China, Czech Republic, France, Germany, Hungary, Russia, and Switzerland.

Hawthorn for the Heart

Hawthorn, when used as an extract, can increase blood flow to the heart muscle; and this helps to prevent a heart attack. In pharmacological tests on both animals and humans, hawthorn has been shown to improve the contractility of the heart muscle; this can lead to a stronger pumping action of the heart, increase cardiac performance and output, lower the peripheral vascular resistance, steady the heartbeat, as well as increasing the heart’s tolerance to oxygen deficiency, such as what happens during stress or excitement, or in diseases where the arteries are partially blocked.

In Europe, thousands of doctors prescribe hawthorn to prevent cardiovascular disease or to help alleviate symptoms of mild to moderate problems. Hawthorn is also considered a mildly calming herb for the nervous system.

Dr. Christopher claims that hawthorn and garlic should be added to one’s daily dietary regimen when there is any suspicion of problems of cardiovascular disease. Hawthorn is especially beneficial for those who:

Since the late 19th century, hawthorn has been used successfully for various diseases of the cardiovascular system, including angina pectoris, functional heart disease, arrhythmia, early manifestations of circulatory insufficiency of advanced age, and as a heart tonic to regulate circulation.

Long-term use of hawthorn has shown to strengthen and nourish the heart. It dilates the arteries that supply the heart muscle itself with blood, oxygen, and fuel, providing a better supply of these essential nutrients. Hawthorn acts as a powerful free-radical scavenger, protecting the heart against the harmful effects of lessened oxygen – a common result of vascular disease such as atherosclerosis. It can also help steady the heartbeat if it is irregular.

Hypertension is a health issue which could lead to severe complications. It is an important risk factor for cardiovascular disease. Currently, it affects 1 billion people worldwide, and this number is expected to rise to 1.6 billion by 2025. Although there have also been significant advances in therapeutic concepts, hypertension in most individuals remains untreated or uncontrolled. Several small clinical trials with hawthorn have demonstrated modest blood pressure reduction.

According to the University of Maryland, preliminary evidence suggests hawthorn may help combat angina. In one early study, 60 people with angina were given either 180 mg/day of hawthorn berry leaf flower extract or placebo for 3 weeks. Those who received hawthorn experienced improved blood flow to the heart and were also able to exercise for longer periods of time without suffering from chest pain.

When something is this healthy, it only makes sense to add this to your diet as much as you are able. Be advised though, if you seek using any part of the hawthorn as medicine, please seek professional consultation first as this has contraindications with some drugs.

Heart Health the Herbal Way shows what other wild plants there are that are great for heart health.