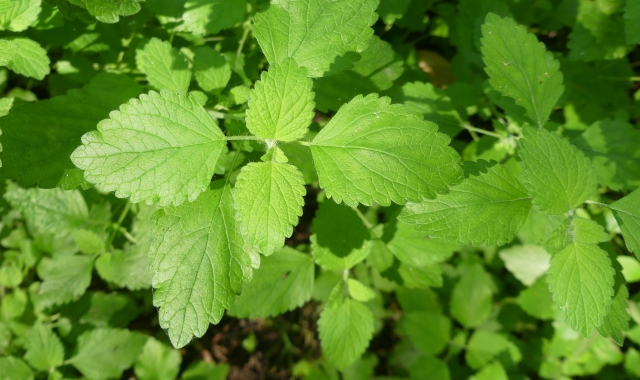 Lemon balm (Melissa officinalis), also known as melissa balm, English balm, garden balm, balm mint, common balm, melissa, sweet balm, and heart’s delight, is an aromatic herb from the mint family (Lamiaceae). It is a native of Europe, Northern Africa and central Asia, and is now cultivated in most temperate and subtropical regions all over the world. In addition to its popularity to be cultivated, this plant grows wild in some locations throughout North America.

Many of us here in Canada and the United States don’t think of lemon balm being an edible wild plant, but after all, this is how it all began thousands of years ago. Even today,  lemon balm grows in the wild but chances are a seed from a cultivated garden made it to a wild location thanks to a bird. Regardless of how it has taken root in wild locations, it is there and when you discover a patch it sure is exciting to see it thriving outside of a garden.

Lemon Balm as an Edible

There are many edible uses for lemon balm thanks to its mild lemon flavour. As a seasoning it is extremely versatile and as a beverage, it is favourite to use in the summer months. It is also an important ingredient in herb liqueurs such as Chartreuse and Bénédictine and in spirits such as Carmelite.

Lemon balm’s lemony flavour and aroma are due largely to citral and citronellal, although other phytochemicals, including geraniol (which is rose-scented) and linalool (which is lavender-scented), also contribute to lemon balm’s scent. Although science has shown us many of the chemical constituents in this plant, very little information is out there on the mineral and vitamin content.

Lemon balm contains Vitamins B1, B2 and C. It contains calcium, magnesium, sodium, potassium and zinc. In addition it contains impressive amounts of trace minerals such as boron, manganese, copper, chromium, molybdenum, selenium, and iron.

Lemon balm is approved by the German Commission E for nervous sleep disorders and ‘functional gastrointestinal complaints’. The European Scientific Cooperative on Phytotherapy recommends the external use of lemon balm for cold sores and the internal use for tenseness, restlessness, irritability, digestive disorders and minor spasms. Lemon balm is used in homeopathic remedies as well as in preparations which include: teas/infusions, tinctures, syrups, capsules, powders, poultices, salves, steams, fomentations, oil, and dried extracts.

Lemon balm has a lot of beneficial chemical constituents which include:

It also contains the following flavonoids:

Not only does lemon balm have an impressive background from traditional medicine, but, according to the latest studies, it is effective in cardiovascular disease, by decreasing the values of total lipid concentration, improving HDL (high density lipoprotein) values, and lowering the hepatic synthesis of cholesterol.

Some of lemon balm’s actions include:

Perhaps it is best known for its ability to cure cold sores. Applying a simple to make lip balm has proven to reduce the symptoms of cold sores, heal the sores faster, and prevent infections from spreading.

Wild or cultivated, lemon balm is definitely an herb we all should consider incorporating into our daily life.

About the Author
Karen Stephenson is an author, professional writer, wild food educator, and a certified Master Naturalist. Foraging and being outdoors are her passions.
Social Share
2 Comments